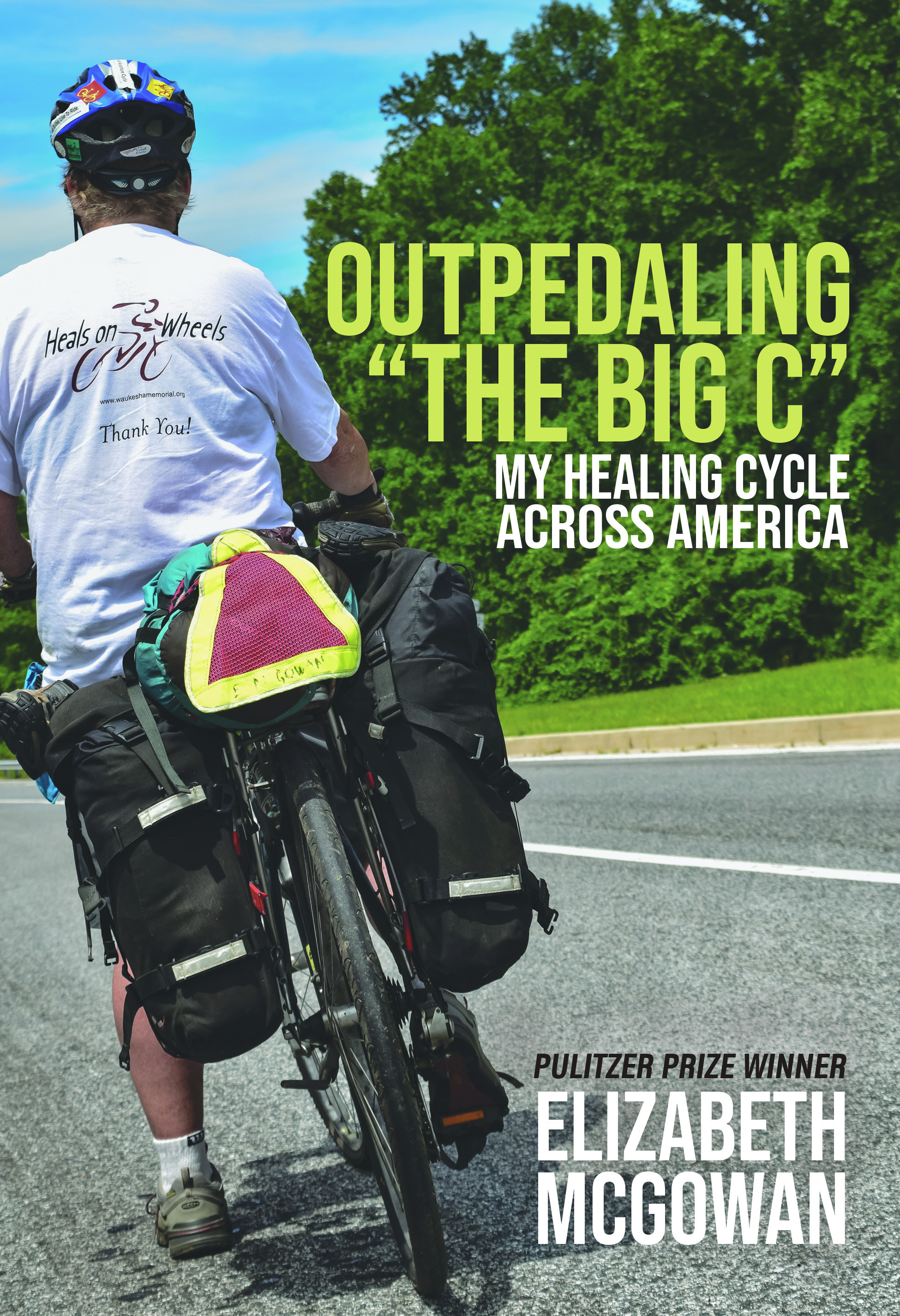 My Healing Cycle Across America

“Proceed as the way opens” is how William Least Heat-Moon put it in his book, River Horse. The line becomes a sort of mantra for Pulitzer Prize-winner Elizabeth McGowan, a melanoma survivor. Having been given a five-year clean bill of health, McGowan decides to bicycle all 4,000 or so miles from America's west to east coast. For her, there are multiple reasons for the exhausting trip. She wants to help other melanoma victims, and sets out to use her many miles to raise funds for cancer research in southeastern Wisconsin, where she was treated.

She also wants to better understand her late father, who died of melanoma at the age of 44, when Elizabeth was just fifteen. She rides through small towns and places that she visited as a kid with her dad, mom, and siblings. Her long, nearly 90-day cycling trip across the U.S. continent not only showcases people affected by cancer and more than willing to help promote cancer research, but it personally brings McGowan closer to her father.

Recalling him at different places and times during his short life, she begins to realize that she owes directly to him the ease with which she meets people across her long transcontinental route. She comes to see that, like her father, she is funny, and has the dedication and resilience needed to take on and complete major projects. At the end of her bicycle ride, McGowan's mother shows her, for the first time, letters about her father received after his untimely death. They open her eyes to the fact that she, too, can move through life with gusto whenever she makes sure that “the way opens.”

Outpedaling the Big C is an anything-but-typical, exhilarating journey story revealing how immersion in the natural world is a balm for the wounded.

Elizabeth McGowan was born in Philadelphia in 1961. She spent most of her childhood there, running around with her four sisters and tip-toeing past her often angry father, Ron McGowan, who was a gifted teacher. At such a young age, she could never have imagined where she would be years later―living with the same cancer that killed her father when she was just fifteen. She was diagnosed with melanoma in the 1980s, several times in very similar spots to her father’s.

McGowan graduated from the University of Missouri-Columbia School of Journalism with a Bachelor of Journalism degree. She started her journalism career at daily newspapers in Wisconsin and Vermont, which she worked while enduring several bouts of melanoma. In the 1990s, she won numerous explanatory writing and reporting awards from the Wisconsin Newspaper Association, the Milwaukee Press Club, the American Heart Association, and the Wisconsin Association of School Boards while a general assignment and feature writer, first for The Janesville Gazette and then for the Racine Journal Times. In 2007, McGowan won second place in the Cleveland Press Club’s Ohio Excellence in Journalism Awards contest in the public service/investigative category for two stories published by Crain Communications about the five-year anniversary of Sept. 11; one story focused on the compromised health of cleanup workers, and the other on the environmental complications associated with razing the Deutsche Bank building near the Twin Towers site in New York.

In 2013, she won the Pulitzer Prize for National Reporting for “The Dilbit Disaster: Inside the Biggest Oil Spill You’ve Never Heard Of.” She was the lead reporter for a three-person team at the digital news startup, InsideClimate News. The e-book version of the series won the Rachel Carson Book Award from the Society of Environmental Journalists that same year. The series, “Dilbit Disaster,” won the James Aronson Award for social justice reporting in 2013 along with an honorable mention for the John B. Oakes Award for Distinguished Environmental Reporting; it was also a finalist for the Scripps Howard Foundation Award.

Today, she is an author and a Pulitzer Prize-winning energy and environment reporter who is dedicated, savvy, endlessly curious, adept at finding sources, and able to present complicated topics in straightforward and compelling language. Her first book, Outpedaling “The Big C,” shows just how incredible a person she is―a woman with an urge to heal and discover through endless adventures. She continues to work as a freelance reporter in Washington D.C.; several of her articles can be found at https://energynews.us/author/emcgowan/ along with her own digital startup (www.renelwalnews.org), where original reporting explores the intersection of nature, labor, and energy in feature stories and investigative news pieces. She lives in Washington, DC, with her husband Don.