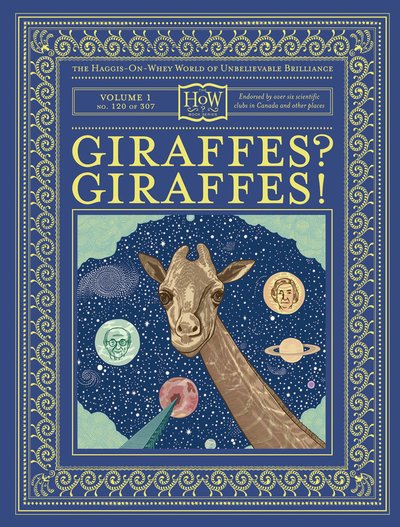 For many years the scientific and educational communities have wondered and worried about the possibility that semi-sane scholar-pretenders would find the means to publish a series of reference books aimed at children but filled with ludicrous misinformation. These books would be distributed through respectable channels and would inevitably find their ways into the hands and households of well-meaning families, who would go to them for facts but instead find bizarre untruths. The books would look normal enough, but would read as if written by people who have eaten too many lead-based paint chips. Giraffes? Giraffes! is the first in a proposed series of 377 reference books, all written by a couple now getting their chance to twist and tickle the brains of the impressionable. The book puts forth the following novel theories: that giraffes were not part of any evolutionary chain, but came here from Neptune, by way of very long (but convenient and fast) escalators; that giraffes are expert dancers, but become angry if asked about their dancing; that giraffes control over 90 percent of what we see in mirrors; and that the Giraffe navy is as strong as ever, contrary to recent claims in the popular press.