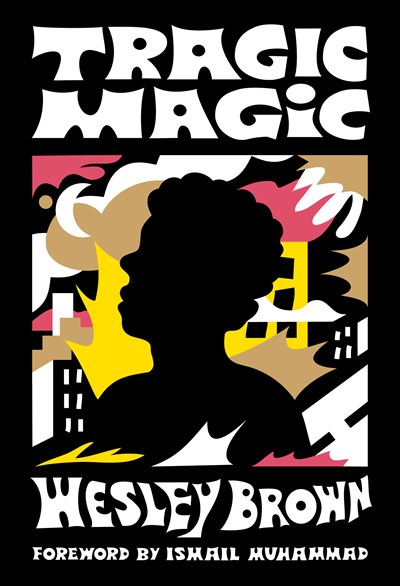 (Of the Diaspora - North America)

Tragic Magic is the story of Melvin Ellington, a.k.a. Mouth, a Black, twenty-something, ex-college radical who has just been released from a five-year prison stretch after being a conscientious objector to the Vietnam War. Brown structures this first-person tale around Ellington’s first day on the outside. Although hungry for freedom and desperate for female companionship, Ellington is haunted by a past that drives him to make sense of those choices leading up to this day.

Through a filmic series of flashbacks, the novel revisits Ellington’s prison experiences, where he is forced to play the unwilling patsy to the predatory Chilly and the callow pupil of the not-so-predatory Hardknocks; then dips further back to Ellington’s college days, where again he is led astray by the hypnotic militarism of the Black Pantheresque Theo, whose antiwar politics incite the impressionable narrator to oppose his parents and to choose imprisonment over conscription; and finally back to his earliest high school days, where we meet in Otis, the presumed archetype of Ellington’s “tragic magic” relationships with magnetic but dangerous avatars of black masculinity in crisis. But the effect of the novel cannot be conveyed through plot recapitulation alone, for its style is perhaps even more provoking than its subject.

Originally published in 1978, and edited by Toni Morrison during her time at Random House, this Of the Diaspora edition of Tragic Magic features a new introduction by author Wesley Brown.

" Tragic Magic is a tremendous affirmation. .One hell of a writer."
- James Baldwin

About Of the Diaspora:

McSweeney's Of the Diaspora is a series of previously published works in Black literature whose themes, settings, characterizations, and conflicts evoke an experience, language, imagery and power born of the Middle Passage and the particular aesthetic which connects African-derived peoples to a shared artistic and ancestral past. Wesley Brown's Tragic Magic, the first novel in the series, was originally published in 1978 and championed by Toni Morrison during her tenure as an editor at Random House. This Of the Diaspora edition features a new introduction written by Brown for the series. Tragic Magic will be followed by Paule Marshall's novel of a Harlem widow claiming new life. Praisesong for the Widow was originally published in 1983 and was a recipient of the Before Columbus Foundation American Book Award. The series is edited by writer Erica Vital-Lazare, a professor of creative writing and Marginalized Voices in literature at the College of Southern Nevada. Published in collectible hardcover editions with original cover art by Sunra Thompson, the first three works hail from Black American voices defined by what Amiri Baraka described as strong feeling "getting into new blues, from the old ones." Of the Diaspora-North America will be followed by series from the diasporic communities of Europe, the Caribbean and Brazil.

Wesley Brown is an acclaimed novelist, playwright, and teacher. He worked with the Mississippi Freedom Democratic Party in 1965 and became a member of the Black Panther Party in 1968. In 1972, he was sentenced to three years in prison for refusing induction into the armed services and spent 18 months in Lewisburg Federal Penitentiary. For 27 years, Brown was a much-revered Professor at Rutgers University, where he inspired hundreds of students, including novelist Junot Diaz. He currently teaches literature at Bard College at Simon's Rock.