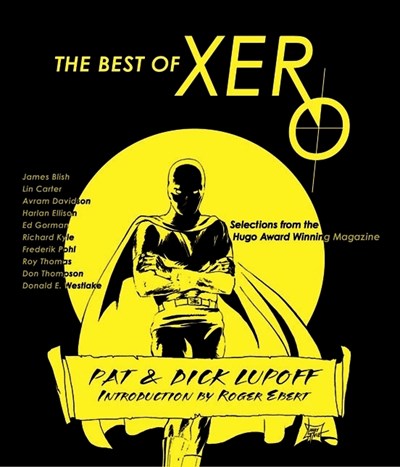 From modest beginnings to the 1963 Hugo Award for Best Fanzine, Xero was a fascinating and controversial convergence of writers, artists, and a burgeoning fan community. Collected here from Pat & Dick Lupoff’s legendary fanzine are an array of excellent essays, memoirs, and ongoing debates on science fiction, mysteries, comic books, and popular culture as well as the revolving letters of comment that are virtual forerunners of the Internet.

Highlights of The Best of Xero include Harlan Ellison’s prescient take on the movie Psycho, Donald Westlake’s humorous denouncement of the science-fiction field, James Blish’s nostalgic look back on his scriptwriting stint for the Captain Video serial, Lin Carter’s spot-on parody of Sax Rohmer’s Fu Manchu novels; and Don Thompson’s detailed analysis of the origins of ultrapowerful and mysterious comic-book heroes Dr. Fate and The Spectre.

The Best of Xero also features original comics and illustrations from Xero and an introduction by film critic and Xero contributor Roger Ebert.

Pat and Dick Lupoff produced and edited the Hugo Award-winning fanzine Xero from its inception in 1960 through its last issue in 1962. Richard A. Lupoff went on to a long writing and editing career, publishing more than thirty novels and numerous volumes of short stories. Pat Lupoff works at Dark Carnival, a science-fiction and fantasy specialty bookstore, and has been a book buyer and seller for more than twenty years.

Roger Ebert was the resident poet of Xero and also published his own fanzine, Stymie. He was perhaps better known for his role as a culturally iconic film critic.