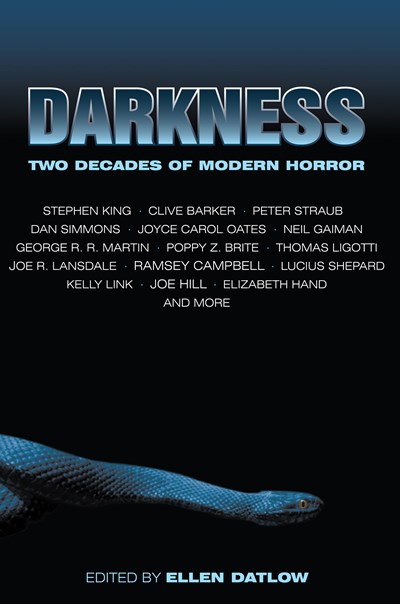 This sophisticated, scary anthology collects the best horror fiction published between 1984 and 2005, one of horror’s most innovative eras. These exceptionally diverse stories, hand-picked by horror-expert editor Ellen Datlow, are tales of the subtly psychological, the unpredictably mischievous, and the disturbingly visceral.

Here are classics, such as horror master Stephen King’s ?Chattery Teeth,” the tautly drawn account of a traveling salesman who unwisely picks up yet another hitchhiker; Peter Straub’s eerie ?The Juniper Tree,” describing a man whose nostalgia for the movies of his childhood leads to his stolen innocence; and George R. R. Martin’s sinister ?The Pear-Shaped Man,” in which a young woman encounters a neighbor who likes her a bit too much.

Whether you grew up on Clive Barker’s Books of Blood; Joyce Carol Oates’s ?Where Are You Going, Where Have You Been?”; Neil Gaiman’s Sandman; or are newly discovering Stephen King’s son, breakout author Joe Hill; there is something here for everyone who enjoys being more than just a little bit scared.

Ellen Datlow is one of the best-known editors of science fiction, fantasy, and horror working in the field today. She was the fiction editor of OMNI from 1981?1998 and has since edited the online magazines Event Horizon and Sci Fiction. Her many anthologies include Naked City; Snow White, Blood Red; Blood and Other Cravings; and Poe. Datlow has won five Hugo Awards, eight Locus Awards, three Bram Stoker Awards, two Shirley Jackson Awards, and nine World Fantasy Awards.