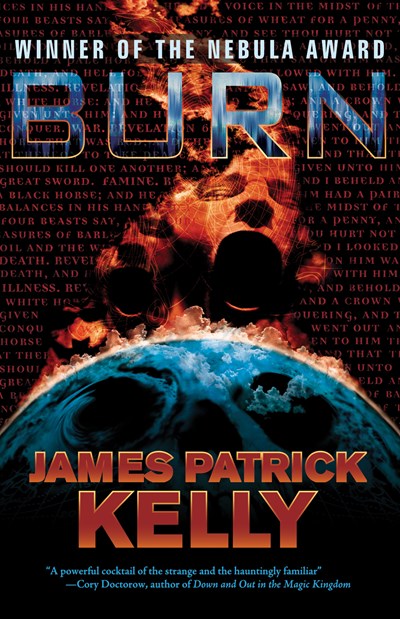 Burn is James Patrick Kelly at his best, and there’s nothing better.”
—Connie Willis, author of Doomsday Book

The tiny planet Morobe's Pea has been sold and renamed Walden. The new owner has some interesting ideas. Voluntary simplicity will rule in the Transcendent State; Walden is destined to become a paradise covered in lush new forests.

But even believers find temptations in the black markets; non-believers are willing to defend their ideals with fire. Walden's only hope may lie with a third option: a very unlikely alien intervention.

In Burn, James Patrick Kelly (Think Like a Dinosaur) delivers an innovative, entertaining, and morally-complex vision of the perils of idealism.

James Patrick Kelly has won the Hugo, Nebula and Locus awards and his fiction has been translated into eighteen languages. His most recent publication is a career retrospective in Centipede Press’s Masters of Science Fiction series entitled James Patrick Kelly. His sixth novel Mother Go is forthcoming from Audible.com and a short story collection The Promise of Space will be published in October by Prime Books. With John Kessel he is co-editor of Digital Rapture: The Singularity Anthology, Kafkaesque: Stories Inspired by Franz Kafka, The Secret History Of Science Fiction, Feeling Very Strange: The Slipstream Anthology and Rewired: The Post Cyberpunk Anthology. He writes a column on the internet for Asimov's Science Fiction Magazine and is on the faculty of the Stonecoast Creative Writing MFA Program at the University of Southern Maine.