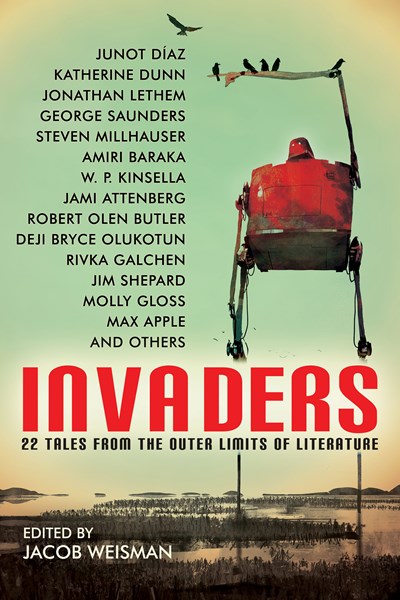 22 Tales from the Outer Limits of Literature

The invasion of the future has begun.

Literary legends including Steven Millhauser, Junot Diáz, Amiri Baraka, and Katharine Dunn have attacked the borders of the every day. Like time traveling mad-scientists, they have concocted outrageous creations from the future. They have seized upon tales of technology gone wrong and mandated that pulp fiction must finally grow up.

In these wildly-speculative stories you will discover the company that controls the world from an alley in Greenwich Village. You’ll find nanotechnology that returns memories to the residents of a nursing home. You’ll rally an avian-like alien to become a mascot for a Major League Baseball team.

The Invaders are here. But did science fiction colonize them first?

Jim Shepard, the author of seven novels, most recently The Book of Aron, has won numerous awards and has been a finalist for the National Book Award. He also teaches creative writing and film at Williams College.

Steven Millhauser, the Pulitzer Prize winning author of Martin Dressler, has written many novels, and is probably best known for his short stories (The Barnum Museum). He teaches at Skidmore College.

Julia Elliott is the author of a recently published novel, The New and Improved Romie Futch. She has won the Rona Jaffe Writer’s Award, and her stories have been anthologized in Pushcart Prize: Best of the Small Presses and Best American Short Stories. She teaches at the University of South Carolina.

Rivka Galchen is a Canadian American writer who received her MD from Mount Sinai and an MFA from Columbia University. Her first novel, Atmospheric Disturbances, won the Danuta Gleed Literary Award and the William Saroyan International Prize. Her short stories have been published in the Harper’s, the New York Times Magazine, and the Believer. She is a recipient of the Rona Jaffe Foundation Writer’s Award was chosen in 2010 by the New Yorker as one of its ?20 Under 40.”

After Deji Bryce Olukotun came to the United States and obtained degrees from Yale and Stanford, he studied at the University of Cape Town with South African writers André Brink, Mike Nicol, Andre Wiesner, and Henrietta Rose-Innes. His novel, Nigerians in Space, was published by Unnamed Press in Los Angeles. Olukotun’s fiction and nonfiction has been published by Slate, the New York Times, the Los Angeles Times, the Los Angeles Review of Books, the Atlantic, the Huffington Post, PEN America, the London Magazine, and Electric Literature.

Jonathan Lethem began his career writing science fiction. His first novel, Gun with Occasional Music, merges science-fiction tropes with those of hardboiled detective novels. He later found his home in literary fiction, winning the National Book Critics Circle Award and a MacArthur Fellowship. He has written nine novels to date, including Motherless Brooklyn, and The Fortress of Solitude. He was born and lives in Brooklyn, New York.

Jami Attenberg has written four novels: The Kept Man, The Melting Season, The Middlesteins, and, most recently, Saint Mazie. The Middlesteins was a finalist for the Los Angeles Times Book Prize for Fiction and the St. Francis College Literary Prize. Attenberg has written essays about television, sex, technology, and other topics, and her work has appeared in the New York Times, the Wall Street Journal, Real Simple, and other publications.

Brian Evenson’s work, including Immobility, Last Days, The Open Curtain, Dark Property, and Altmann’s Tongue, skirts the boundary between horror and literature. Evenson has received the O. Henry Award, the International Horror Guild Award, and the American Library Association’s RUSA Award for Best Horror Novel. He has also been nominated for the Edgar Award and four times for the Shirley Jackson Award. He teaches in the School of Critical Studies at CalArts

Born in the Dominican Republic and raised in New Jersey, Junot Díaz is the author of Drown; The Brief Wondrous Life of Oscar Wao, which won the 2008 Pulitzer Prize and the National Book Critics Circle Award; and This Is How You Lose Her, a New York Times bestseller and National Book Award finalist. He is the recipient of a MacArthur Fellowship, PEN/Malamud Award, Dayton Literary Peace Prize, and PEN/O. Henry Award. The fiction editor at Boston Review, Díaz is a professor at the Massachusetts Institute of Technology.

Max Apple has been writing short stories (most recent collection The Jew of Home Depot and Other Stories, novels (Zip, The Propheteers), and screenplays (Roommates, The Air Up There) for the last forty years. He still teaches for the University of Pennsylvania.

Amiri Baraka, who has also written as LeRoi Jones, was the Poet Laureate of New Jersey. Baraka has written poetry, plays, fiction, essays and musical criticism. Widely known as a revolutionist and political activist he is the winner of the PEN Open Book Award for Tales of the Out & the Gone.

J. Robert Lennon is the author of two story collections, Pieces for the Left Hand and See You in Paradise, and seven novels, including Mailman, Familiar, and Happyland. He teaches writing at Cornell University.

Eric Puchner is the author of the story collection Music Through the Floor and the novel Model Home, which was a finalist for the PEN/Faulkner Award and the Barnes & Noble Discover Award and won the California Book Award Silver Medal for best work of fiction. He is an assistant professor in the Writing Seminars at Johns Hopkins University.

Karen Heuler has published more than eighty stories in a variety of literary and science-fiction magazines, including the Alaska Quarterly Review, Clarkesworld, Michigan Quarterly Review, the Boston Review, Lady Churchill’s Rosebud Wristlet, Weird Tales, and Daily Science Fiction. She has published four novels and two short-story collections, and has received the O. Henry Award and been nominated for the Pushcart Prize, among many others. Heuler lives in New York City with her dog, Philip K. Dick, and her cats, Jane Austin and Charlotte Brontë.

W. P. Kinsella is the author of Shoeless Joe, famously adapted into the film Field of Dreams. His other novels include The Iowa Baseball Confederacy, Box Socials, and Butterfly Winter. He has also published more than a dozen-and- a-half collections, most recently The Essential W. P. Kinsella. Widely considered one of the greatest fiction writers about baseball, Kinsella is as well known in his native Canada for his award-winning and controversial First Nation stories, humorous and gritty tales of the complex lives of indigenous Canadians. He currently lives near Vancouver.

Molly Gloss writes literary fiction, westerns, and occasionally science fiction. Her novels include Outside the Gates, The Jump-Off Creek, The Dazzle of Day, Wild Life, The Hearts of Horses, and Falling from Horses. Gloss has received the Whiting and James Tiptree, Jr., awards, as well as the Oregon Book Award, the Pacific Northwest Booksellers Award, and the Theodore Sturgeon Memorial Award.

Chris Tarry’s debut story collection, How to Carry Bigfoot Home, was released last year from Red Hen Press. Tarry is one of New York’s most-sought-after bass players and has won four JUNO and Canadian Independent Music awards. His fiction has appeared in the Literary Review, On Spec, Grain, the G. W. Review, PANK, Bull Men’s Fiction, Monkeybicycle, and elsewhere. In 2011, he was a finalist in FreeFall magazine’s annual prose and poetry competition, and most recently, his story ?Here Be Dragons” was nominated for the Pushcart Prize. Tarry holds an MFA in creative writing from the University of British Columbia. He lives and works in Brooklyn, New York.

Kelly Luce has a degree in cognitive science. She lived and worked in Japan and received fellowships from MacDowell Colony, Ucross Foundation, Kerouac Project, and others. Her work has appeared in the Chicago Tribune, Salon, O, and the Southern Review, among others. She recently received her MFA in writing and works as a contributing editor for Electric Literature. She lives in Santa Cruz, California.

A converted screenwriter, Ben Loory has published a collection of short stories, Stories for Nighttime and Some for the Day, and a children’s book, The Baseball Player and the Walrus. He has an MFA in screenwriting and teaches at UCLA Extension. He has also appeared on This American Life.

Robert Olen Butler’s first collection of short stories, A Good Scent from a Strange Mountain, won a Pulitzer Prize in 1993. Among his other honors are a Guggenheim Fellowship, the F. Scott Fitzgerald Award for Outstanding Achievement in American Literature, two National Magazine Awards in fiction, and the Tu Do Chinh Kien Award for outstanding contributions to American culture by a Vietnam veteran. He has published sixteen novels, most recently The Empire of Night, as well as six collections of short fiction.

George Saunders is one of America’s leading satirists. Before becoming a writer, he was a geophysicist in Sumatra. His work includes CivilWarLand in Bad Decline, Pastoralia, In Persuasion Nation, and Tenth of December: Stories. Saunders has won many awards, including a MacArthur Fellowship, a Guggenheim Fellowship, an Academy Award from the American Academy of Arts and Letters, the Story Prize, the Folio Prize, the PEN/Hemingway, the PEN/Malamud, National Magazine, and World Fantasy awards. A regular contributor to the New Yorker and GQ, his work has appeared in the series Best American Short Stories, Best American Nonrequired Reading, O.Henry Prize Stories, and Best American Science Fiction.

Katherine Dunn is best known for her novel Geek Love, a National Book Award finalist, and the novels Attic and Truck. She is considered one of the best journalists on boxing in America today, and she received the Dorothea Lange?Paul Taylor Award for her work School of Hard Knocks: The Struggle for Survival in America’s Toughest Boxing Gyms. Her long-awaited fourth novel, The Cut Man, has yet to be released, but a part of it appears in the Paris Review under the title ?Rhonda Discovers Art.” Dunn currently teaches creative writing at Pacific University in Oregon.

Editor Jacob Weisman is the publisher at Tachyon Publications, which he founded in 1995. He has been nominated for the World Fantasy Award three times for his work at Tachyon and is the series editor of Tachyon’s Hugo, Nebula, Sturgeon, and Shirley Jackson Award?winning novella line.