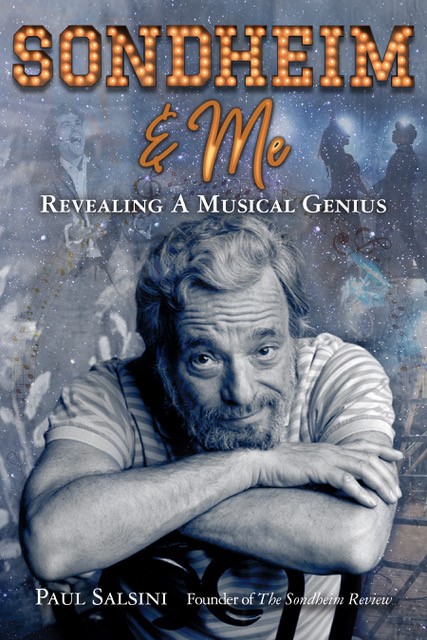 FOR TEN YEARS, they exchanged notes, letters, faxes, and phone calls. Stephen Sondheim would contact him, and Paul Salsini, the founder and editor of The Sondheim Review, would respond. And vice versa.

Now, Salsini, a Milwaukee journalist, has described his unlikely long-distance relationship with the fabled composer/lyricist in Sondheim & Me: Revealing a Musical Genius. The memoir includes the dozens of notes that Sondheim sent Salsini about articles in the magazine. It was clear that, at least at the start in 1994, he read every word of every issue, and often his comments were what Sondheim called “emendations,” pointing out a typo, a wrong first name or a misreading of a scene.

There were a few disagreements; Sondheim was furious about the magazine's review of one of his shows and called to loudly complain. After the magazine published his lyrics for a high school show, he wrote to “object vigorously to your reprinting my juvenilia.”

But mostly there was a good working relationship, and Sondheim's responses were encouraging and sometimes enthusiastic. “Congratulations on another good issue!” “Keep up the good work!” Sondheim & Me also includes numerous reports of talks, forums, and Q&As in which Sondheim revealed his process for composing, his inspirations, his comments on his shows (the original film of West Side Story “isn't any good,” the first act of Sunday in the Park with George “is a stunt,” the film of A Little Night Music is “dreadful”).

The magazine reported on the openings of Passion, Saturday Night, and the troubled Mizner musical. And the decade also saw the Broadway revivals of A Funny Thing Happened on the Way to the Forum, Company, Follies, Into the Woods, and Gypsy. Besides all that, there was the $10 million Kennedy Center Sondheim Celebration with a repertory of six of his musicals.

It was a remarkable decade for Stephen Sondheim, and Paul Salsini and The Sondheim Review were there to report it all. Almost none of the book's material has been seen by the general public—at its height, The Sondheim Review had but a few thousand subscribers.

To thoroughly understand the great, revolutionary artistry of Stephen Sondheim, Sondheim & Me is indispensable. In what may be something of an exclusive, the book also contains an extensive, detailed chronology of Sondheim's life, his works, and the many tributes he received. Sixty-four pages of photos of Sondheim productions, along with many TSR covers and the notes Sondheim wrote, enhance this illuminating, groundbreaking book.

Paul Salsini graduated from Marquette University with a degree in journalism and worked for The Milwaukee Journal for 37 years. He was a reporter, editor, and staff development director. He was also the Wisconsin correspondent for The New York Times for 15 years, and his travel essays have appeared in the Times and elsewhere. He taught writing courses at Marquette for many years, and is now the writing coach for Milwaukee Neighborhood News Service.

As someone knowledgeable about musical theater, he also taught the History of Musical Theater course at Marquette and in 1994 founded The Sondheim Review, a magazine devoted to the works of the composer/lyricist, and was its editor for ten years. He now gives musical theater presentations at retirement homes.

He began writing fiction in 2006 with “The Cielo: A Novel of Wartime Tuscany.” It won several awards and became the first in the six-volume “A Tuscan Series.” His latest book, “A Tuscan Treasury: Stories from Italy’s Most Captivating Region,” was published in 2021. All ten of his books are set in Tuscany, the land of his roots.

He and his wife Barbara have three children and four grandchildren. They live in Milwaukee with their cat Rosie.