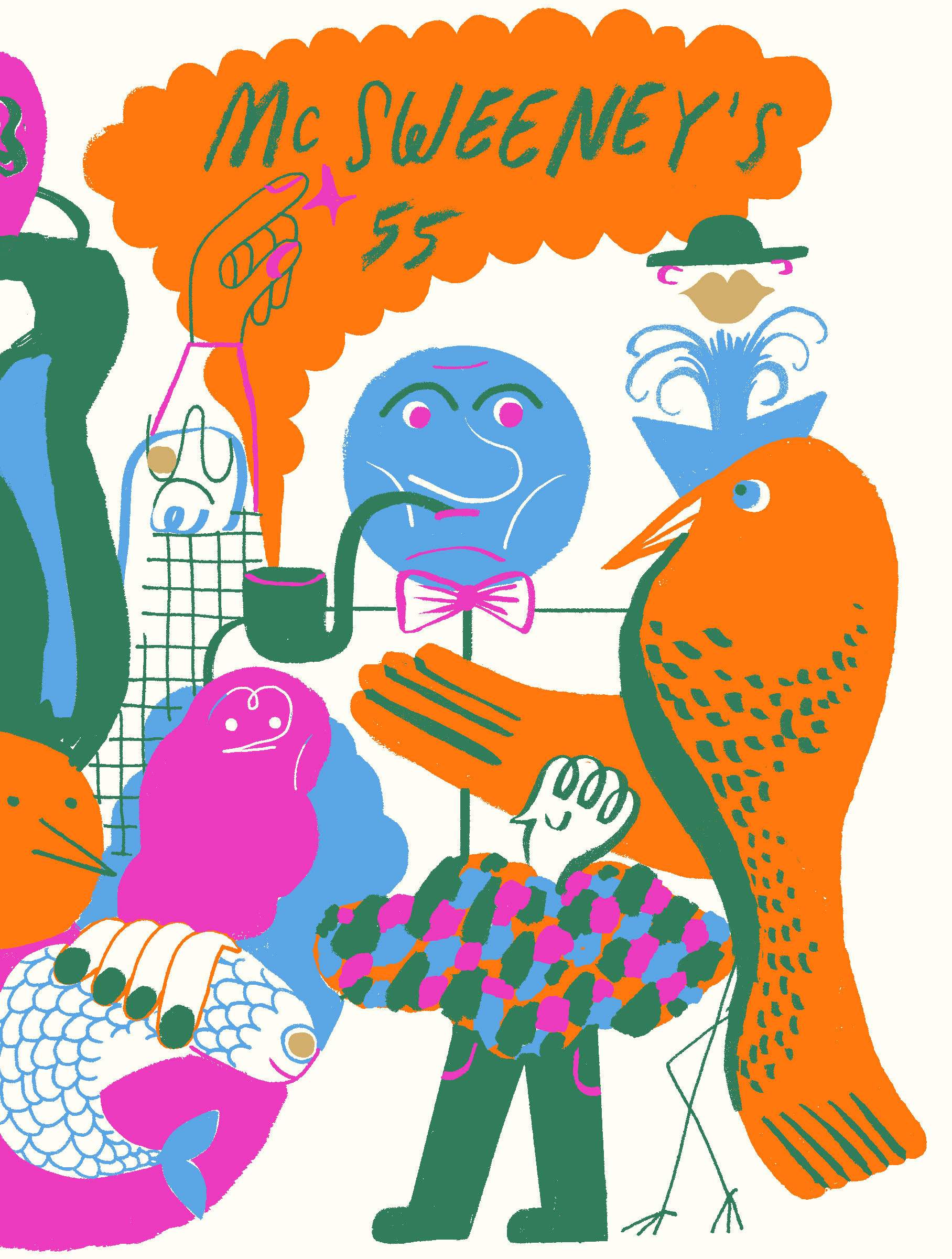 Fresh off winning the 2019 ASME award for fiction, issue 55 features new fiction from Laura van den Berg, Gordon Lish, T Kira Madden, and Emma Copley Eisenberg, and more; letters about face masks and puttanesca and the rapid disintegration of our natural world by R. O. Kwon, Alexander Chee, and Jack Pendarvis; a searing nonfiction piece by José Orduña that harkens back to shoe-leather journalism, chronicling his experience at immigrant-rights demonstrations across the spectrum of activism; oh, and a 16-page section of mesmerizing photography by Pelle Cass from his series "Crowded Fields." Read and be renewed!

MARCUS BURKE graduated from the Iowa Writer's Workshop. Burke's debut novel, Team Seven, was published in 2014 by Doubleday. Team Seven received a starred review from Kirkus Reviews, was long-listed for the 2015 PEN Open Book Award, and was one of the "17 Books You Won't Be Able to Put Down This June" in O, The Oprah Magazine. Burke was the inaugural Creative Writing Fellow at Susquehanna University from 2016 to 2017, and is on the faculty at Southern New Hampshire University's Mountainview Low-Residency MFA program. He is currently at work on another novel.

PELLE CASS is a photographer from Brookline, Massachusetts. His work is in the collections of the Fogg Art Museum, the Addison Gallery of American Art, the Polaroid Collection, the DeCordova Museum, the Peabody Essex Museum, the MFA, Houston, and others. He has shown at the George Eastman House, the Albright Knox Gallery, the New Mexico Museum of Art, and the Metamorf Biennial for Art and Technology in Norway. Cass's work has been published widely online, in magazines, and in books, and he's received fellowships from Yaddo, the Polaroid Collection, and the Artist's Resource Trust.

ALEXANDER CHEE is the author of How to Write an Autobiographical Novel.

STEPHEN DIXON is the author of the story collections Dear Abigail and Other Stories (Trnsfr, 2018) and Writing, Written (Fantagraphics Books, 2019).

EMMA COPLEY EISENBERG's fiction and nonfiction have appeared in Granta, Tin House, VQR, American Short Fiction, the Los Angeles Review of Books, AGNI, and other publications. She lives in Philadelphia, where she co-directs the community literary hub Blue Stoop. Her first book, The Third Rainbow Girl, will be published by Hachette Book Group in 2020.

KATE FOLK's fiction and essays have appeared most recently in Zyzzyva, the New York Times Magazine, Prairie Schooner, and One Story. She lives in San Francisco and is working on a novel about AI limbs and emotional unavailability.

JOANNA HOWARD is a writer and translator from Miami, Oklahoma. Her memoir, Rerun Era, is forthcoming from McSweeney's in October of 2019. She is the author of the novel Foreign Correspondent, the story collections On the Winding Stair and In the Colorless Round, and Field Glass, a collaborative novel written with Joanna Ruocco. She also co-translated Walls by Marcel Cohen and Cows by Fre?de?ric Boyer. She teaches in the literature PhD program at Denver University.

R.O. KWON's first novel, The Incendiaries, was published by Riverhead Books. She is a National Endowment for the Arts Literature Fellow. Her writing has appeared in the Guardian, Vice, BuzzFeed, Noon, Time, Playboy, and elsewhere.

RAVEN LEILANI has been published in Narrative, Granta, New England Review, and the Florida Review. She is the fiction editor of Ruminate magazine and an MFA candidate at NYU.

GORDON LISH is best known for his long labor as a strict destructionist, the latest book-length evidence of which posture is on exhibit in White Plains, New York. He is also a sucker for certain styles of liquid alliteration.

T KIRA MADDEN is an APIA writer, photographer, and amateur magician. She is the founding editor in chief of No Tokens and the author of Long Live the Tribe of Fatherless Girls (Bloomsbury, 2019). She lives in New York City and teaches at Sarah Lawrence College.

PETER MCGRATH lives in a small, old house outside of Washington, DC, with a large, young cat.

JOSE? ORDUN~A's work explores living as a racialized subject of the United States. His first book, The Weight of Shadows: A Memoir of Immigration and Displacement, was published in 2016 by Beacon Press. He is an assistant professor of English at the University of Nevada, Las Vegas.

JOSEPH OSMUNDSON is a scientist, teacher, and writer from a small town in Washington State. He has a PhD in molecular biophysics from the Rockefeller University, and his work has been published in places like Guernica, BuzzFeed, Gawker (RIP), the Village Voice (OMG RIP), and the Feminist Wire, where he works on the editorial staff. He's published two (award-los- ing) books and, with three other queer writers, co-hosts the "popular" podcast Food 4 Thot, a round-table discussion of books, boys, butts, and Beyonce?.

ASALI SOLOMON is the author of Disgruntled and the story collection Get Down. She lives in the city of Philadelphia, where she is currently working on another novel about Philadelphia.

SHRUTI SWAMY's fiction has been included in the 2016 and 2017 editions of The O. Henry Prize Stories, and has appeared in the Paris Review. She lives in San Francisco.

LISA TADDEO is a two-time recipient of the Pushcart Prize. Her debut book of nonfiction, Three Women, is out this summer from Simon & Schuster, to be followed by her first novel and story collection.

LUCY TAN is author of the novel What We Were Promised, available now from Little, Brown and Company. Originally from New Jersey, she currently lives in Wisconsin, where she is the 2018-19 James C. McCreight Fiction Fellow at the University of Wisconsin, Madison. She can be found at www.lucyrtan.com.

JENNY TRAIG spends most of her time at home with her family and her yarn stash. Her latest book is Act Natural: A Cultural History of Misadventures in Parenting.

LAURA VAN DEN BERG's most recent book is The Third Hotel. She is also the author of the novel Find Me and two story collections, including The Isle of Youth. Laura lives in Cambridge, Massachusetts, where she is a Briggs- Copeland Lecturer in Fiction at Harvard.

COLIN WINNETTE is the author of several books, including The Job of the Wasp (Soft Skull Press) and Haints Stay (Two Dollar Radio). He lives in San Francisco.