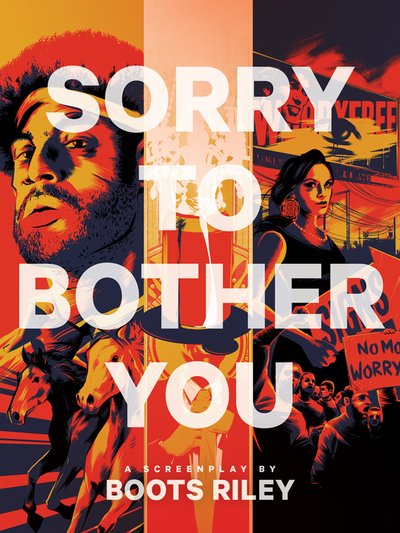 Sorry to Bother You

The brand-new edition Boots Riley's Sorry to Bother You—originally published in 2014, in McSweeney's 48—is available now.

Now a major motion picture, Sorry to Bother You offers a raucous view into class, politics, and race in a dystopic (but all too real) modern-day Oakland, California. This screenplay shows us code-switching as high art, and what it takes in today's world to climb that capitalist ladder.

Raymond “Boots” Riley was born in Chicago to a family of progressive labor organizers who settled in Oakland when Boots was six. His father was a famous lawyer who represented the Black Panthers; his grandmother ran the Oakland Ensemble Theater; and his uncle was an actor who performed monologues and one- man shows. Boots himself joined the Black Repertory Theater in Berkeley as a high-school student.

Like Cassius Green, Riley worked multiple jobs as a young man, including stints as a telemarketer, high school teacher, party promoter and eventually an internationally renowned rapper. In 1991, he formed The Coup, a politically minded hip-hop collective that received a major-label recording deal from Wild Pitch Records/EMI. In September 2001, as The Coup released its album Party Music, Riley had an idea for a song about a telemarketer who finds himself selling slaves for a nefarious corporation. Ten years later, he began turning that concept into Sorry to Bother You.

In the fall of 2014, he ran into Bay Area novelist, screenwriter and literary fixture Dave Eggers and Riley asked Eggers to read his script. Eggers told him it was one of the best-unproduced scripts he had ever read, and agreed to release it in McSweeney’s Quarterly Concern as its own paperback book, reaching thirty thousand readers.

Around the same time, on the strength of his two-decade stint with The Coup, and the completed screenplay in McSweeney’s, Riley became Artist in Residence at the San Francisco Film Society. Shortly thereafter, he entered the prestigious Sundance Screenwriting Lab, followed by the Director’s Lab. Ten years after Boots’ idea for the project first surfaced, Sorry to Bother You premiered at the 2018 Sundance Film Festival in Dramatic Competition.