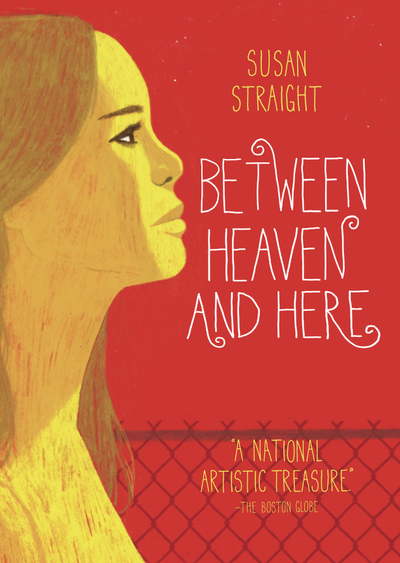 No one's ever fallen out of love with Glorette Picard, with her black waterfall of hair and skin gold as a mothwing. Fine as wine and just my kind, they call her. Gilt, they call her. Still, when they drive by the alley where she works every night, they call her other things.

Now Glorette's body is found in that alley, folded up in a shopping cart. Before the dry creek swells and the orange groves blossom, Rio Seco, California, will bury the most beautiful woman who ever walked its streets. In Susan Straight's most gracefully told novel, the heart of the Inland Empire is broken wide open to reveal the loyalty, the dark history, and the love that runs in the veins of a hidden America. Between Heaven and Here is gripping in its compassion? a portrait that ?ought to be recognized as a national artistic treasure" (The Boston Globe).

Susan Straight’s new novel, Between Heaven and Here, is the final book in the Rio Seco trilogy. Take One Candle Light a Room was named one of the best novels of 2010 by The Washington Post, the Los Angeles Times and Kirkus, and A Million Nightingales was a 2006 Finalist for the Los Angeles Times Book Prize. Her novel Highwire Moon was a Finalist for the 2001 National Book Award. Her short story "The Golden Gopher" won the 2008 Edgar Award for Best Mystery Story. She has published stories and essays in The New York Times, the Los Angeles Times, Harpers, McSweeney’s, The Believer, Salon, Zoetrope, Black Clock, and elsewhere. She is Distinguished Professor of Creative Writing at UC Riverside. She was born in Riverside, CA, where she lives with her family, whose history is featured on susanstraight.com.