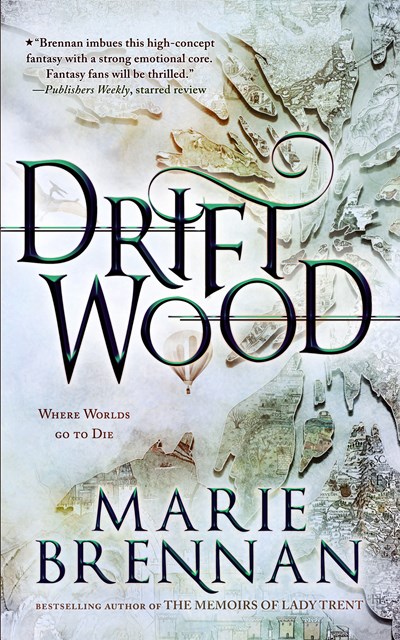 [STARRED REVIEW] “Exploring found family, adaptation, and hope in the face of apocalypse, Brennan imbues this high-concept fantasy with a strong emotional core. Fantasy fans will be thrilled.”—Publishers Weekly [A Best Sci Fi Book of 2020]

In this first novel set in award-winning author Marie Brennan’s incomparable Driftwood fantasy universe, enter a post-apocalyptic realm where the apocalypse has not ended, where fragments of worlds cohere into shifting myths. Yet even as everything fades, Drifters gather to tell conflicting legends of Last, the guide—the one man who seemed immortal, but may have been a fraud.

Fame is rare in Driftwood—it’s hard to get famous if you don't stick around long enough for people to know you. But many know the guide, Last, a one-blooded survivor who has seen his world end many lifetimes ago. For Driftwood is a strange place of slow apocalypses, where continents eventually crumble into mere neighborhoods, pulled inexorably towards the center in the Crush. Cultures clash, countries fall, and everything eventually disintegrates.

Within the Shreds, a rumor goes around that Last has died. Drifters come together to commemorate him. But who really was Last? Lying liar, or heroic savior? A mercenary, a charlatan, a legend? A man, an immortal—perhaps even a god?

About Driftwood
Driftwood is the invention of bestselling author Marie Brennan. Mirroring the world that many people are currently living in, the Driftwood stories chronicle the struggles of survivors and outcasts to keep their worlds alive until everything changes, diminishes, and is destroyed. Driftwood is the first full-length novel in this world.

Marie Brennan is a former anthropologist and folklorist who shamelessly pillages her academic fields for material. She recently misapplied her professors’ hard work to Turning Darkness Into Light, a sequel to the Hugo Award-nominated Victorian adventure series The Memoirs of Lady Trent. She is the author of the Doppelganger duology of Warrior and Witch, the urban fantasies Lies and Prophecy and Chains and Memory, the Onyx Court historical fantasy series, the Varekai novellas, and nearly sixty short stories, as well as the New Worlds series of worldbuilding guides. For more information, visit www.swantower.com or @swan_tower on Twitter.