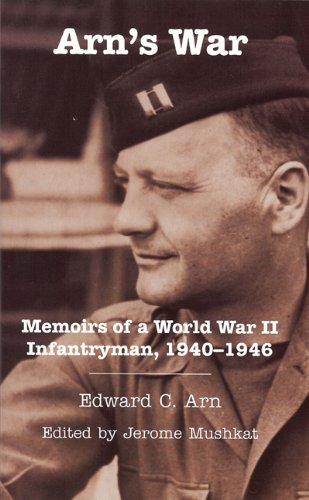 This memoir of World War II, written by Edward C. Arn, an infantry captain who served in Company F, 2nd Battalion, 30th Infantry Division, is a valuable addition to military history and social history. Arn takes readers on a wartime journey with him in the European Theatre of Operations through a clear and honest account of combat from the viewpoint of a sensitive and acute "civilian in uniform." Arn describes his life during the Great Depression, his motivation to volunteer, his stateside basic training, and his role as an infantry instructor. Assigned overseas as a replacement a few weeks after the D-Day invasion of Normandy, Arn joined the 30th Division, a former National Guard unit partially from Tennessee, nicknamed "Old Hickory" in honor of President Andrew Jackson. Arn entered combat and proved his worth in the hedgerows of Normandy, the Battle of Mortain, the push through northern France and the Netherlands, the Battle of the Buldge, the Ardennes Campaign, and the invasion of the German heartland to the Elbe River. During his sixteen months on the front lines, Arn underwent a transformation from an apprehensive novice into a battle-tested veteran.

Edward C. Arn, a highly decorated infantry captain, received the Silver Star with Cluster; Purple Heart with Cluster; Bronze Star; Combat Infantry Badge; World War II Victory Medal; American Campaign Medal; Army of Occupation, World War II, Germany; Good Conduct Badge; and European Theater of Operations Campaign Badge with five Clusters. He was part of the Army of the United States, Fox Company, 119th Regiment, 30th Infantry Division. After the war, he became an active member in multiple veterans' organizations and a much sought-after figure in local affairs. His community and state honored him in a number of ways, most notably by inducting him into the Ohio Veterans Hall of Fame in 2003. He lives with Patricia, his wife of over 57 years, in Wooster, Ohio. He has six children and sixteen grandchildren.