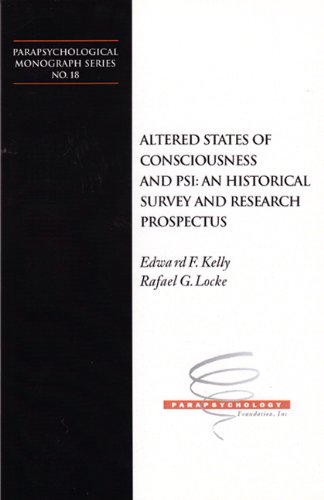 Altered States of Consciousness and PSI: An Historical Survey and Research Prospectus

First published in the 1970s, this edition has an updated preface that renders the material current. The authors feel that the distribution of voluntary psi abilities within the general population is far from the bell-shaped or "normal" curve, and that many of the field's strongest experimental outcomes are obtained in a repeatable fashion because high between-subject variation seemed certain in terms of psi capacity and whatever properties of physiological organization and function might underlie it. The central strategy advocated was to approach psi indirectly, through intensive study of various altered states of consciousness with which it appears to have been strongly associated, historically and cross-culturally. These unusual states of consciousness seem more accessible than psi itself to psychophysiological analysis with a possibility of a solution to the replicability problem.

Edward F. Kelly is a research professor in the Division of Perceptual Studies (DOPS), a unit of the Department of Psychiatry and Neurobehavioral Sciences at the University of Virginia, and president of Cedar Creek Institute, a Virginia nonprofit research institute. He has a Ph.D from Harvard in psycholinguistics and cognitive science.

Rafael G. Locke is national director of IKon Institute, which he founded in Australia. He has a Ph.D. from the University of Western Australia and did postdoctoral research at Harvard and the Massachusetts Institute of Technology. Since l988 he has undertaken extensive research in cross-cultural medicine and psychiatry developing a number of therapeutic innovations for the treatment of alcoholism in indigenous people. Dedicated to the preservation and teaching of traditional healing methods, he is currently preparing a new volume that is a detailed analysis of shamanism and its relation to contemporary healthcare practice while working in cooperation with the Cedar Creek Institute to further joint research.

Other Titles from Parapsychology Foundation Inc