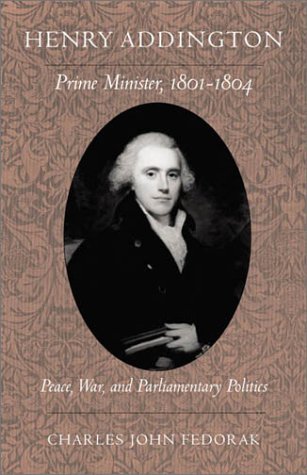 No modern British Prime Minister has been so thoroughly misunderstood or simply dismissed as Henry Addington. This is the first book about Addington as Prime Minister. Its purpose is to tell Addington’s story, from the point of view of him and his colleagues, in a vein similar to recent biographies of Charles James Fox by Leslie Mitchell and Georgiana, Duchess of Devonshire, by Amanda Foreman. Addington, who had no ambition for higher office, agreed to become Prime Minister only because his predecessor, William Pitt the younger, and King George III insisted. He immediately faced the serious and difficult challenge of leading a relatively inexperienced Cabinet to deal with a series of military, diplomatic, economic, and social crises caused by war and famine. Fedorak demonstrates that Addington dealt with these crises as successfully as the circumstances would allow and left a lasting mark on British politics. He negotiated peace with Russia, Denmark, Sweden, and France. He repaired the government finances, delivered the first modern budget speech, and ameliorated social unrest. After boldly declaring war on France in 1803, he doubled the productivity of the Income Tax, and raised more than 600,000 men at arms to fight the French.

In the end, Addington did not fall simply as a result of his own ineffectiveness, but because of a complex train of circumstances in which questions of personality, both within and outside the government, played a major part. Out of these circumstances Addington gained a large body of loyal supporters who would make him one of the most powerful men in British politics during the first quarter of the nineteenh century. The framework is chronological in that it tells the story of his rise and fall as developments occurred over the course of the years 1801 to 1804. Within that framework, each chapter addresses particular topics in a way designed to lead the reader to the end of the story and a new historical conclusion.

Charles John Fedorak is the Director of Information and Privacy Branch, Ministry of Education, Government of British Columbia since 1998. He received his PhD in International History from London School of Economics.