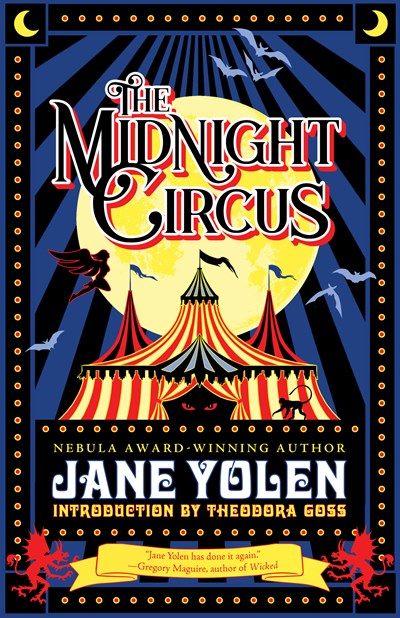 In the newest volume of her World Fantasy Award-winning short story collections, beloved author Jane Yolen’s dark side has fully emerged. Her vivid, startling, and thrilling tales and poems of the supernatural—from icy-hearted witches to sometimes-innocent shapeshifters—reveal a classic storyteller at the height of her powers.

“Look this way, look that; blazing her consummate imagination against the shadows of human sorrow, Jane Yolen has done it again.”—Gregory Maguire, author of Wicked

Welcome to the Midnight Circus—and watch your step. The dark imaginings of fantasy icon Jane Yolen are not for the faint of heart. In these sixteen brilliantly unnerving tales and poems, Central Park becomes a carnival where you can—but probably shouldn’t—transform into a wild beast. The Red Sea will be deadly to cross due to a plague of voracious angels. Meanwhile, the South Pole is no place for even a good man, regardless of whether he is living or dead.

Wicked, solemn, and chilling, the circus is ready for your visit—just don't arrive late.

Jane Yolen has been called the Hans Christian Andersen of America and the Aesop of the twentieth century. She is the author of over three hundred and sixty five books, including children’s fiction, poetry, short stories, graphic novels, nonfiction, fantasy, and science fiction. Her publications include Owl Moon, The Devil’s Arithmetic, Briar Rose, Sister Emily’s Starship and Sister Light, Sister Dark. Among her many honors are the Caldecott and Christopher Medals, multiple Nebula, World Fantasy, Mythopoeic, Golden Kite, and Jewish Book awards; as well as the World Fantasy Association’s Lifetime Achievement Award, and the Science Fiction Poetry Grand Master Award. Yolen is also a teacher of writing and a book reviewer. She lives in Western Massachusetts and St. Andrews, Scotland.

Theodora Goss is the World Fantasy and Locus Award-winning author of the short story and poetry collections In the Forest of Forgetting, Songs for Ophelia, and Snow White Learns Witchcraft. She has been a finalist for the Nebula, Crawford, Seiun, and Mythopoeic Awards, as well as on the Tiptree Award Honor List. Her work has been translated into twelve languages. She teaches literature and writing at Boston University and in the Stonecoast MFA Program. Visit her at theodoragoss.com.

New York Times bestselling author Alethea Kontis is a princess, storm chaser, and geek. Author of more than 20 books and 40 short stories, Kontis is the recipient of the Scribe and Garden State Teen Book Awards, and two-time winner of the Gelett Burgess Children’s Book Award. She also narrates stories for multiple award-winning online magazines, contributes regular YA book reviews to NPR, and hosts Princess Alethea’s Traveling Sideshow. Find out more about Princess Alethea and her wonderful world at aletheakontis.com