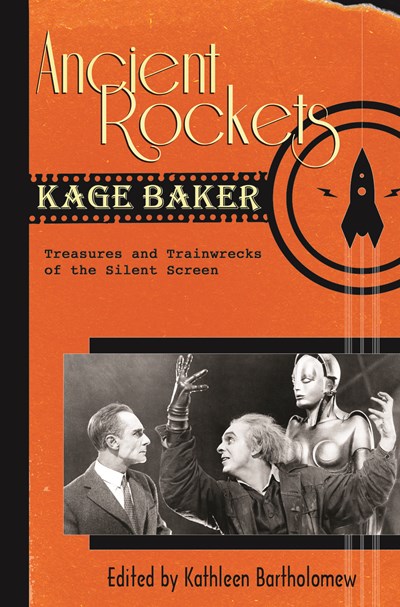 Treasures and Train Wrecks of the Silent Screen

From Metropolis to the pre-Technicolor Oz, take a fantastical journey through the wildest frontiers of the silent films of the silver screen.

Ancient Rockets brings you the earliest (and cheesiest) special effects, the best and worst directors, the tour de forces and the utter trainwrecks. Forty-nine cinematic odysseys will take you on A Trip to the Moon and 20,000 Leagues Under the Sea, swinging upon jungle vines with Tarzan and into the terrifying laboratory of Dr. Frankenstein, from The Adventures of Prince Achmed all the way to Modern Times.

These are the pinnacles and the pitfalls of science fiction's silent movies as affectionately viewed by Kage Baker (the Company series) with acerbic wit and historical acumen. Ancient Rockets presents the mad scientists, terrifying fiends, flimsy plots, and glorious landscapes that have inspired generations of fans and filmmakers alike.

Kage Baker is the author of the Company novels, her series of immortal, time-traveling cyborgs, including In the Garden of Iden, Mendoza in Hollywood, and The Sons of Heaven. Baker received the Nebula and Theodore Sturgeon awards. She was passionately involved in the theater as an actor, director, playwright, and teacher of Elizabethan English as a second language, which she often used for research in her novels.

Kathleen Bartholomew is Kage Baker's sister and editor. She has been working with Baker's unfinished projects since Baker's untimely death from cancer in 2010.