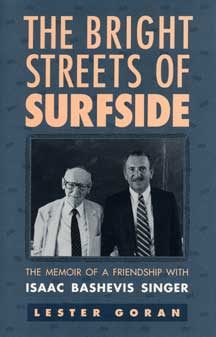 The Bright Streets of Surfside

The Memoir of a Friendship with Isaac Bashevis Singer

The Bright Streets of Surfside chronicles 10 years in the life of Isaac Bashevis Singer, as witnessed and shared by a fellow writer close to him at the time.  In 1978, with a mixture of hero worship and academic responsibility as director of creative writing at the University of Miami, Lester Goran brought Singer to teach at the Coral Gables campus.  The eminent Polish-American author was then 74 years old and five months away from receiving the Nobel Prize.  Goran became Singer’s closest friend and translator as they taught advanced courses in creative writing together until Singer retired in 1988.  With a sometimes painful authenticity, Goran recounts the course of their extraordinary friendship.  It was a fascinating time, writes Goran, recalling his frustration at Singer’s intractable desire not to teach (he mistrusted the faculty and was bewildered by the students) and his pleasure in Singer’s company.

Touching and humorous, the memoir offers a rare opportunity to learn about this influential Yiddish writer who often concealed his real beliefs, feelings, and personal history from the public.  Goran tells the tale with an honesty that is unsparing of his own dilemmas while it is deeply sympathetic to a great writer at odds with himself and his time.  Looking frankly at a crucial time in his own life as a writer, Goran derives some understanding of the moral dimensions of Singer’s art as he was menaced by the burdens of loss, age, and fame.  Goran discusses Singer’s philosophies about his life and art, his works in progress, and his lifelong devotion to literature.  In addition, he offers his own reflections on working with the last grand Yiddish novelist and on his role in keeping Yiddish alive.