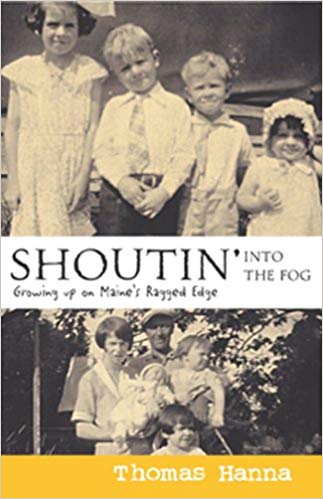 Shoutin' into the Fog

Growing up on Maine's Ragged Edge

Shoutin' Into the Fog is a gritty Depression-era memoir of life in Midcoast Maine. Author Thomas Hanna, a longtime resident of Bath, grew up in the village of Five Islands on Georgetown Island, in a small, crowded bungalow pieced together on the edge of a swamp with secondhand wood and cardboard. He was the eldest son and the second of eight children born to his young mother and his father, a World War I veteran big on dreams, but low on luck. Drawing on insight gleaned from his eighty years, Hanna's Shoutin' Into the Fog is a book written with sensitivity, humor, and subtle emotion about a hardscrabble way of life, old-time Maine, and the meaning of both family and forgiveness. His personal tale casts an honest light not only on his own family, but helps illuminate a way of life common to the coast in the 1920s and 1930s that is slowly fading from memory.

Thomas L. Hanna was a longtime resident of Bath, Maine. Raised in the village of Five Islands on Georgetown Island in Midcoast Maine, he left home at seventeen to join the U.S. Navy during World War II, and eventually made the Navy his career. He retired as a senior chief operations specialist after twenty years of service, and began a second career as a value engineer at Bath Iron Works. He retired in 1988 after twenty-two years. Then, using writing skills he had honed in the Navy and at BIW, he began writing for publication. His articles have appeared in Down East, Reminisce, and Good Old Days. Hanna died in 2008 at age eighty-one.