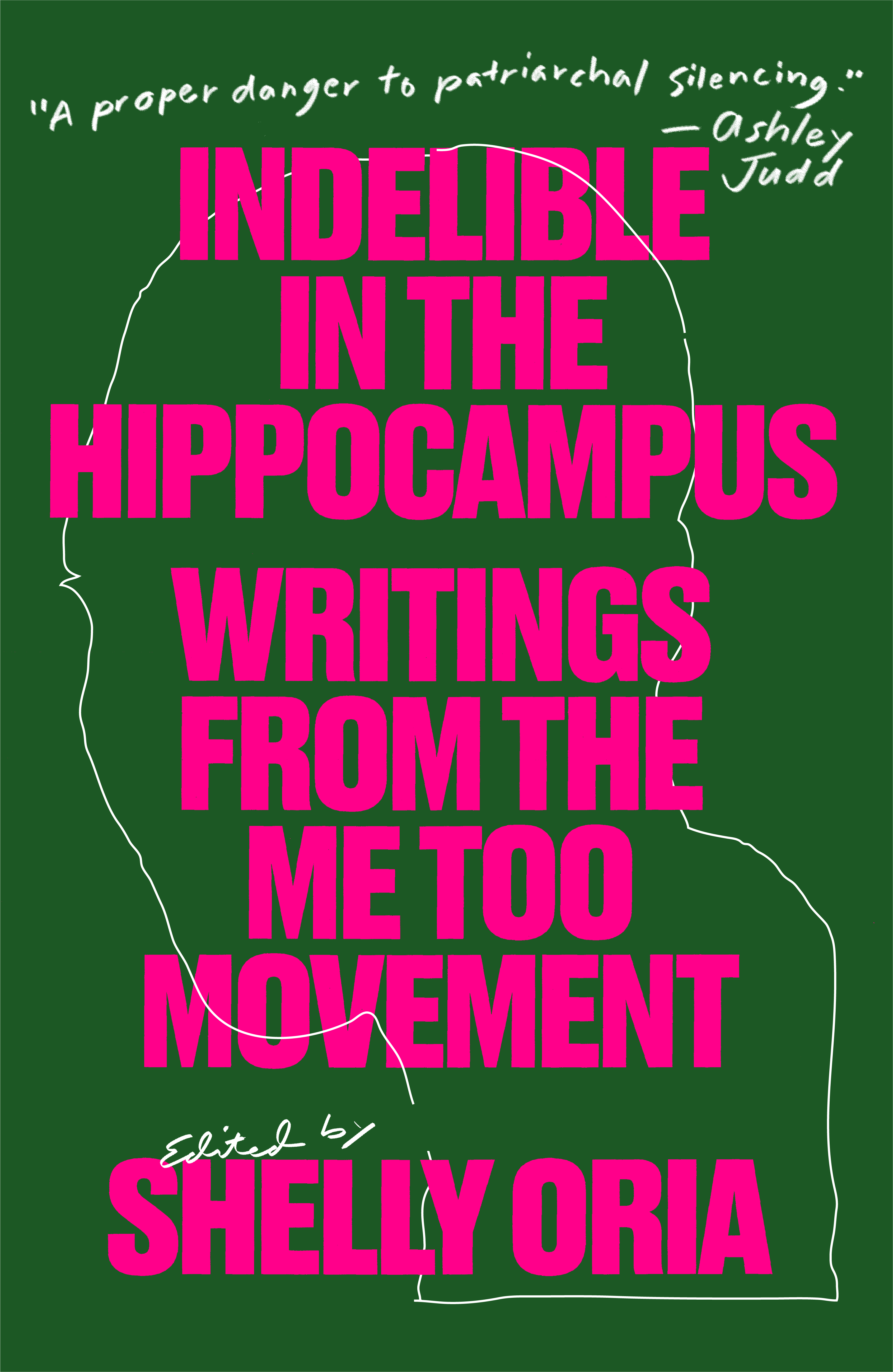 Indelible in the Hippocampus

Writings From the Me Too Movement

"Indelible in the hippocampus is the laughter," said Dr. Christine Blasey-Ford when she testified to congress in September 2018 about the men who victimized her. A year earlier, in October 2017, the hashtag #MeToo shone a light on the internalized, normalized sexual harassment and abuse that'd been ubiquitous for women for generations.

Among the first books to emerge from the #MeToo movement, Indelible in the Hippocampus is a truly intersectional collection of essays, fiction, and poetry. These original texts sound the voices of black, Latinx, Asian, queer, and trans writers, to name but a few, and says "me too" 23 times. Whether reflecting on their teenage selves or their modern-day workplaces, each contributor approaches the subject with unforgettable authenticity and strength.

Together these pieces create a portrait of cultural sea-change, offering the reader a deeper understanding of this complex, galvanizing pivot in contemporary consciousness.

SHELLY ORIA is the author of New York 1, Tel Aviv 0 (Farrar, Straus and Giroux, 2014), which earned nominations for a Lambda Literary Award and the Edmund White Award for Debut Fiction, among other honors. Recently she coauthored a digital novella, CLEAN, commissioned by WeTransfer and McSweeney's, which received two Lovie Awards from the International Academy of Digital Arts and Sciences. Oria's fiction has appeared in The Paris Review and elsewhere; has been translated to other languages; and has won a number of awards, including the Workspace grant from the Lower Manhattan Cultural Council and a Fellowship from the EKF in Bulgaria. Oria lives in Brooklyn, New York, where she teaches at the Pratt Institute and has a private practice as a life and creativity coach. www.shellyoria.com

HOSSANNAH ASUNCION is the author of Object Permanence and has received fellowships from Kundiman, The Poetry Society of America, and The Laundromat Project. She loves her writing composition students at the Borough of Manhattan Community College. She lives in Bed-Stuy, Brooklyn with her wife, daughter, and cat.

GABRIELLE BELLOT is a staff writer for Literary Hub. Her work has appeared in The New Yorker, The New York Times, The Atlantic, The Cut, Guernica, Tin House, Electric Literature, The New York Review of Books, The Paris Review Daily, and many other places. She holds both an MFA and PhD in Fiction from Florida State University. She lives in Brooklyn.

KARISSA CHEN has essays and fiction in Catapult, Longreads, PEN America, Gulf Coast and Guernica, among others. A Fulbright Fellow and NJ Council on the Arts grants recipient, she is also the Editor-in-Chief at Hyphen and Fiction Editor at The Rumpus. She is currently working on a novel.

CAITLIN DELOHERY is a writer and editor from Portland, Oregon. She's is a MacDowell Colony fellow (2009, 2019), and she's currently at work on a memoir about murder, sexual assault, and silence.

CAITLIN DONOHUE is a freelance writer living in Mexico City. She writes about reggaeton for Remezcla and FACT Magazine and on cannabis for High Times, in addition to other publications. Read her work and follow her on Twitter.

MELISSA FEBOS is the author of the memoir, Whip Smart, and the essay collection, Abandon Me. Her work has recently appeared in Tin House, Granta, Sewanee Review, The Believer, and The New York Times. Born in Zaria, Nigeria,

HAFIZAH GETER's poetry and prose have appeared in The New Yorker, Tin House, Narrative Magazine, Gulf Coast, Boston Review, Los Angeles Review of Books, McSweeney's and Longreads, among others. She is an editor for Little A from Amazon Publishing and serves on the poetry committee for the Brooklyn Book Festival. KAITLYN GREENIDGE's debut novel is We Love You, Charlie Freeman (Algonquin Books), one of the New York Times Critics' Top 10 Books of 2016. She is currently a contributing writer for The New York Times. She lives in Brooklyn, NY.

JOLIE HOLLAND is an American songwriter, bandleader, multi instrumentalist, singer, producer, and author. Her albums include The Living and the Dead, Pint of Blood, and Wine Dark Sea.. In a review on National Public Radio, critic Stephen Thompson lauded her music for combining blues, rock, jazz, and soul into "a sound that lands halfway between dusty rural Americana and grimy New York art-rock." Holland's essays have been published by University of Chicago Press and by Talk House. Her lyrics were used as the epigraph in Kerouac's first novel The Haunted Life.

SAMANTHA HUNT is the author of The Dark Dark: Stories, and three novels. Mr. Splitfoot is a ghost story. The Invention of Everything Else is about the life of inventor Nikola Tesla. The Seas, Hunt's first novel, was republished by Tin House Books in 2018. Hunt is the recipient of a 2017 Guggenheim Fellowship and the Bard Fiction Prize.

DONIKA KELLY is the author of Bestiary (Graywolf 2016) and the chapbook Aviarium (500 Places 2017). She is a Cave Canem Graduate Fellow, and winner the 2018 Kate Tufts Discovery Prize. She is an Assistant Professor teaching creative writing at Baruch College.

SYREETA MCFADDEN is a writer and professor of English at the Borough of Manhattan Community College, City University of New York. Her work has appeared in the poetry anthology, Break Beat Poets 2: Black Girl Magic, The Atlantic, New York Times Magazine, Elle, The Guardian, and BuzzFeed News. She is currently writing a book-length collection of essays about African Americans in the Middle West.

LYNN MELNICK is the author of the poetry collections Landscape with Sex and Violence and If I Should Say I Have Hope.

HONOR MOORE's new memoir OUR REVOLUTION: A MOTHER AND DAUGHTER AT MIDCENTURY will be published in March, 2020. Her first collection of poems MEMOIR (1988) will be reissued as a classic collection by Carnegie Mellon in October, 2019.

NELLY REIFLER is the author of See Through and Elect H. Mouse State Judge. Her work has been published in McSweeney's, Lucky Peach, jubilat, and Story, among others, and read aloud on Selected Shorts and at Audible. She lives in New York City and teaches at Sarah Lawrence College.

ELISSA SCHAPPELL is the author of two books of fiction, Blueprints for Building Better Girls, and Use Me, a runner up for the PEN Hemingway Award. She is also a journalist, essayist, and book reviewer, as well as a Contributing Editor at Vanity Fair, and a Founding-editor of Tin House.

REBECCA SCHIFF's collection The Bed Moved came out from Knopf in 2016 and was a finalist for an LA Times Book Prize for First Fiction. Her stories have appeared in Electric Literature, n+1, The Guardian, Washington Square, and BuzzFeed. She lives in Eugene, Oregon.

DIANA SPECHLER is the author of the novels Who by Fire and Skinny, of the New York Times column Going Off, and of a forthcoming memoir. Her work has appeared in GQ, Esquire, BBC Travel, The Wall Street Journal, Esquire, Harper's, Glimmer Train Stories, Harper's Bazaar, and many other publications.

MECCA JAMILAH SULLIVAN, Ph.D. is the author of Blue Talk and Love (stories), and winner of the Judith Markowitz Award for LGBTQ Writers, the Charles Johnson Fiction Award, and honors from Bread Loaf, the NEA, and others. She is Assistant Professor of English at Bryn Mawr College. Her fiction and scholarship have been published widely.

QUITO ZIEGLER is a cultural producer with several film projects in the works, including an all-ages TV show about the future, when society has transformed and the world is a better place. They are a founding member of the WRRQ Collective, an intergenerational community of queer/trans artists and activists who make art and food together for visual resistance and collective healing.