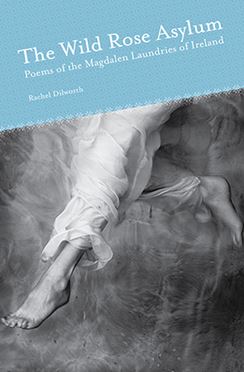 Poems of the Magdalen Laundries of Ireland

The poems of The Wild Rose Asylum offer a multi-faceted consideration of the historical phenomenon of Ireland’s Magdalen asylums, the largest and most controversial of which were run for 150 years, until 1996, by the Catholic Church. In poems that embrace both traditional and experimental forms, Rachel Dilworth’s work explores complex factors involved in the loss by thousands of Irish women of years of their lives, numerous aspects of their identities, and countless future possibilities to confinement and arduous unpaid laundry labor as “penitents” in these facilities for so-called “fallen” women. Pervaded by a cutting awareness of an incarceration of the spirit, as well as of the beauty and naturalness of so many women’s development being suppressed and denied, these poems navigate individual and collective voice and silences, the held and withheld and disappeared or ignored, with a grace and unflinching attention. Humane and wide-ranging, The Wild Rose Asylum is a researched act of witness to an issue rife with loss—poems that seek to be “bird enough to dive far/into the heart of it and bring up something.”

Rachel Dilworth received her MA in Creative Writing from the University of California at Davis and her BA from Yale. Her poems have appeared in TriQuarterly, AGNI Online, American Literary Review, Chautauqua, Spoon River Poetry Review, and elsewhere. She has been the recipient of a Fulbright Fellowship to Ireland for creative writing, a Jack Straw Writers Program residency, Yale’s Clapp Fellowship for poetry, scholarship support from the Bread Loaf Writers’ Conference, commendation in the UK National Poetry Competition, a Dorothy Prize, and other awards.