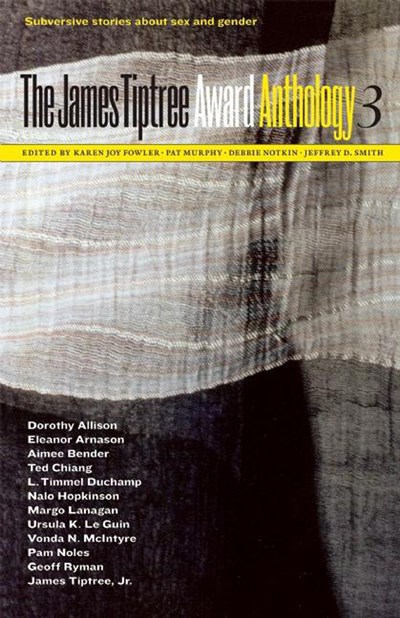 Subversive Stories about Sex and Gender

In these provocative tales intersecting sexuality and identity, a third-world fashionista masters the Internet, an itinerant poet collaborates with its eight selves, a four-way marriage flouts social conventions, and an ugly duckling is reinvented as a compromised swan.

The James Tiptree, Jr., Award is an annual literary prize for speculative fiction that explores and expands gender. The Tiptree Award is named for one of science fiction’s most brilliant writers, Alice B. Sheldon. Sheldon, an ex-debutante turned CIA operative, wrote for ten years as the enigmatic James Tiptree, Jr., until her true identity was uncovered.

Karen Joy Fowler, Pat Murphy, Debbie Notkin, and Jeffrey D. Smith are the editors of the James Tiptree Award Anthologies. They are members of the Tiptree Motherboard, a volunteer organization that administers the Tiptree Award at Wiscon, the annual feminist convention in Madison, Wisconsin. The Motherboard won the 2011 Thomas D. Clareson Award for Distinguished Service to science fiction. The Tiptree Award was created by Pat Murphy and Karen Joy Fowler and has been given since 1991 for ?works of science fiction or fantasy that expand or explore one’s understanding of gender.”