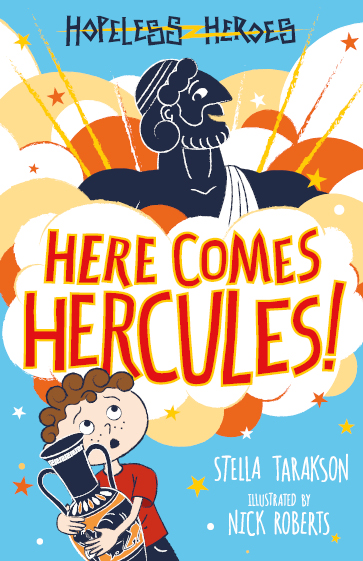 Book 1 in the Hopeless Heroes series that takes readers on fun adventures back to Ancient Greece!

When Tim Baker breaks his mum’s favorite vase, it’s the least of his problems. The Greek hero he’s released is in danger of doing far worse. To the flowers, the rug—
"Oh, no! Not the kitchen!"
Hercules is only trying to be helpful but he’s just hopeless. It’s time to send this dim demigod home before Tim becomes ancient history.
About the Hopeless Heroes series:
Hopeless Heroes is a fun-filled series about Greek mythology, adventure and what it means to be a hero. Readers aged 7+ will love diving into the world of Tim Baker and his (sort of) friend Hercules. A great series to bridge the gap before the Percy Jackson series. All titles are also leveled for classroom use, including GRLs.

Stella Tarakson =============== Stella majored in law, but writing was always her passion. Before long, she left her 'sensible' job and plunged into the world of publishing. She has now written over 30 books. As the daughter of Greek immigrants, Stella was steeped in Greek mythology, and she uses her love of Greece in her books. Nick Roberts ============ Nick Roberts was born in Colwyn Bay, North Wales, and moved to Somerset when he was five years old. He turned the art studio at his school into his second home, and majored in graphic design from Bristol Polytechnic in 1986. His most memorable project has been the branding of the European Youth Olympics in Bath. Nick moved back to Somerset to set up a home studio in 2007.