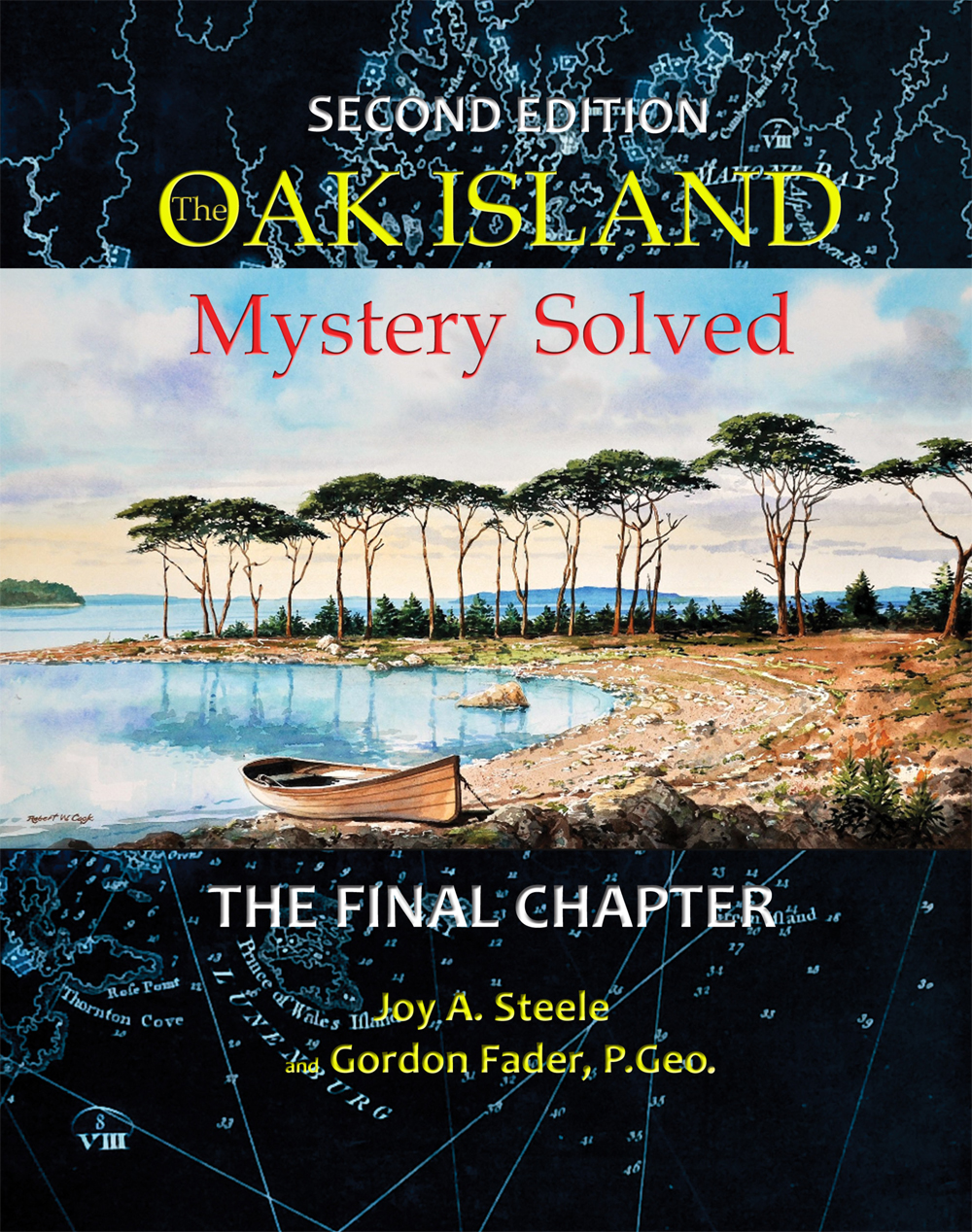 Legends, questions and theories abound about Oak Island, Nova Scotia, and tales of buried treasure there. For more than two centuries, the island has been studied, searched, probed and cursed all the while failing to give up its secrets.

Joy Steele's ground-breaking book, The Oak Island Mystery, Solved (CBU Press 2015), was born of her own curiosity about "Oak Island gold," and her application of historical research to the mystery caused quite a stir among treasure hunters, historians, archaeologists and folks just plain interested in what was and is going on there. Her version of events and her take on the now mythical treasure attracted the attention of a great many Island-watchers, drawing the interest of some and the ire of others.

Among the people "interested" are many who in the past studied, explored and written about Oak Island. One of those people is professional geologist Gordon Fader, whose expertise has been sought out over the years by numerous explorers, treasure hunters, consultants and researchers whose names appear frequently throughout Joy's enquiries and books, and many others.

In her first book, Joy made the very convincing argument that Oak Island's true treasure is its multi-layered history—its role in 18th-century world affairs. Not only have the bold and sometimes foolhardy physical efforts of the treasure hunters over the past two-and-a-half centuries likely been in vain, but have almost certainly destroyed much of the evidence of what actually took place there.

Over the past couple of years, Joy Steele and Gordon Fader have been working together to solidify Joy's theories on the tantalizing evidence of human activity on Oak Island. In the process, their collaboration has not only strengthened Joy's earlier revelatory conclusions that there was manufacturing activity on the Island in the early 1700s but, remarkably, uncovered still more evidence unexplored until now.

Joy A. Steele is the author of The Oak Island Mystery: Solved (CBU Press 2015). A freelance researcher based in Sydney, Nova Scotia, Joy has always had an interest in the Oak Island mystery. She has been engaged for nearly twenty years and countless hours of primary and secondary research surrounding Oak Island history and geology.

Gordon Fader is a professional Marine Geologist registered in Nova Scotia, and former Emeritus Scientist at the Geological Survey of Canada (Atlantic), at the Bedford Institute of Oceanography. President of Atlantic Marine Geological Consulting, Gordon was responsible for mapping and research on the surficial sediments and shallow bedrock geology of the southeast Canadian Continental Shelf, and has published more than 300 maps, reports and scientific papers. He has conducted more than 100 research ship and submersible expeditions offshore Canada.

He has been involved in geoscience and environmental aspects of most major offshore projects off Eastern Canada, including Hibernia Oil Development, Scotian Shelf Gas Development, Confederation Bridge construction, Swissair 111 crash investigation, Halifax Harbour Cleanup and many telecommunication, gas pipeline and electrical transmission route studies. Gordon is a specialist in the study of seabed processes and sediment characteristics.