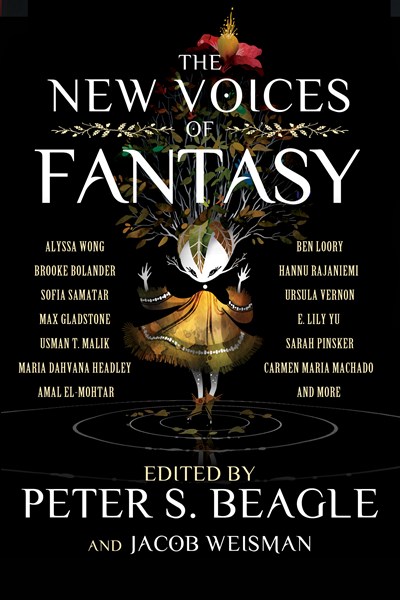 Peter S. Beagle (editor) is the bestselling author of The Last Unicorn, which has sold over five million copies since its initial publication in 1968. His other novels include A Fine & Private Place, The Innkeeper's Song, Tamsin, Summerlong and In Calabria. His short fiction collections include The Rhinoceros Who Quoted Nietzsche, The Line Between, and Sleight of Hand. Beagle has won the Hugo, Nebula, Mythopoeic, and Grand Prix de l'Imaginaire awards and the World Fantasy Award for Lifetime Achievement. He lives in Richmond, California.

Brooke Bolander is a short story writer who admits she "writes weird things of indeterminate genre." She is a self-professed admirer of Peter S. Beagle, and her stories have appeared in Lightspeed, Strange Horizons, and the anthology Aliens: Recent Encounters. She lives in Brooklyn.

Nebula Award winner Amal El-Mohtar is a Canadian author of science fiction and fantasy and edits the poetry magazine Goblin Fruit. Her short story collection, The Honey Month, was published by Papaveria Press in 2011. She won the Locus Award in 2015 and three Rhysling Awards for her poetry. She has also been nominated for the World Fantasy and Aurora Awards. Her stories have appeared in Shimmer, Strange Horizons, Lackington's, Lightspeed, Uncanny, and The Starlit Wood. She lives in Ottawa.

Eugene Fischer studied physics at Trinity University and is a graduate of both the Iowa Writers, Workshop and the Clarion Science Fiction and Fantasy Writers. Workshop in San Diego, His writing has appeared in Asimov's and Strange Horizons. His 2016 novella "The New Mother" won the James Tiptree, Jr. Award, was awarded 2nd place for the Sturgeon Award, and was nominated for the Nebula Award. He currently lives in Austin, Texas where he helped create a science fiction writing summer camp for children.

Max Gladstone is the author of the Craft sequence, beginning with his debut novel, Three Parts Dead. He is the creator of the urban fantasy serial Bookburners and (with Lindsay Smith) The Witch Who Came in from the Cold. He has two novels forthcoming and is working on George R. R. Martin's Wild Cards anthology series. Gladstone was nominated for the John W. Campbell Award twice and has also been nominated for the Lambda and Mythopeic Awards. He lives in Somerville, Massachusetts.

Maria Dahvana Headley is a New York Times-bestselling author, editor, playwright, and screenwriter. She is the author of four novels, a memoir, and co-edited the anthology Unnatural Creatures with Neil Gaiman. Her debut young adult novel, Magonia, came out in 2015. Her short stories have been finalists for the Shirley Jackson and Nebula awards, and have appeared in Lightspeed, Subterranean, Tor.com, Clarkesworld, Fantasy & Science Fiction, and Shimmer.

A converted screenwriter, Ben Loory has published a collection of short stories, Stories for Nighttime and Some for the Day, and a children's book, The Baseball Player and the Walrus. He has an MFA in screenwriting and teaches at UCLA Extension. Loory has also appeared on This American Life. He lives in Los Angeles.

Carmen Maria Machado has been published in numerous outlets Shimmer, The New Yorker, Granta, and The Paris Review and her stories have been in four best of the year anthologies. She has been awarded several writing fellowships and has been nominated for the Shirley Jackson, Nebula, and Calvino awards. Machado's first collection Her Body and Other Parties will be out in 2017. She lives in Philadelphia.

Bram Stoker winner and Nebula nominated author Usman T. Malik is a Pakastani writer of speculative fiction. He has been published in Nightmares, Black Static, Strange Horizons, Tor.com, as well as in at least four best of the year anthologies. Malik led Pakistan's first speculative fiction writing workshop in Lahore. He lives in Florida.

Sarah Pinsker is a singer/songwriter with three albums on various independent labels. She is a very prolific author of short fiction, having published more than forty stories since 2012, including numerous contributions to Asimov's Science Fiction, Fantasy & Science Fiction, Lightspeed, Strange Horizons, and Daily Science Fiction. She has won the Nebula Award and Theodore Sturgeon Awards. She lives in Baltimore, Maryland.

Hannu Rajaniemi is the author of The Quantum Thief, The Fractal Prince, The Causal Angel, and Hannu Rajaniemi: Collected Fiction. His works have received Finland's top science fiction honor, the Tahtivaeltaja Award, as well as the Locus and Campbell awards in the United States. He lives in ever-changing international locations.

Adam Ehrlich Sachs studied atmospheric science at Harvard, where he wrote for the Harvard Lampoon. His fiction has appeared in The New Yorker, n+1, Harper's, and he has written nonfiction for Publishers Weekly, Paris Review Daily, and LitHub. He lives in Pittsburgh, Pennsylvania.

World Fantasy award winner Sofia Samatar is an Somali-American writer, poet, and professor. Her short stories and first novel, A Stranger in Olondria, have garnered numerous accolades and awards. Samatar teaches at James Madison University and edits the poetry journal, Interfictions: A Journal of Interstitial Arts. She lives in Harrisonburg, Virginia.

Chris Tarry's debut story collection, How to Carry Bigfoot Home, was published in 2015. His fiction has appeared in the Literary Review, On Spec, Grain, the G. W. Review, PANK, Bull Men's Fiction, Monkeybicycle, and elsewhere. Tarry's short story "Here Be Dragons"was nominated for the Pushcart Prize. He lives in Brooklyn.

Ursula Vernon is the artist and illustrator of the Digger and Dragonbreath graphic novels, along with many other young-reader stories and graphic novels. Vernon's Digger series won the Eisner and Hugo awards and her story "Jackalope Wives" was the winner of the Nebula and WSFA Small Press Award. She lives near Pittsboro, North Carolina.

Jacob Weisman (editor) is the publisher at Tachyon Publications, which he founded in 1995. He is a three-time World Fantasy Award nominee and is the series editor of Tachyon's critically-acclaimed, award, winning novella line, including the Hugo Award-winner, The Emperor's Soul by Brandon Sanderson, and the Nebula and Shirley Jackson award-winner, We Are All Completely Fine by Daryl Gregory. Weisman has edited the anthologies Invaders: 22 Tales from the Outer Limits of Literature, The Sword & Sorcery Anthology (with David G. Hartwell), and The Treasury of the Fantastic (with David M. Sandner). He lives in San Francisco.

The short stories of A. C. Wise have appeared in Fantasy Magazine, Clarkesworld Magazine, Apex, Shimmer, Uncanny Magazine and many others. Her stories have appeared in numerous anthologies. Wise has two collections of stories, The Ultra Fabulous Glitter Squadron Saves the World Again and Kissing Booth Girl. She lives near Philadelphia.

Alyssa Wong is still studying writing even though she already has a Nebula Award and has been shortlisted for the Pushcart Prize, Bram Stoker, Locus, and Shirley Jackson awards. Her work has appeared in The Magazine of Fantasy & Science Fiction, Strange Horizons, Nightmares, Black Static, and Tor.com. She lives in Raleigh, North Carolina.

JY Yang is the author of the Tensorate series of novellas forthcoming from Tor.com (The Red Threads of Fortune, The Black Tides of Heaven). Their short stories have appeared in venues like Uncanny, Lightspeed, and Strange Horizons. J graduated from the Clarion West class of 2013 and received their MA in Creative Writing from the University of East Anglia. They live in Singapore.

In the short time that E. Lily Yu has been writing speculative fiction, she has won the John W. Campbell Award for Best New Writer and been nominated for the Hugo, World Fantasy, Sturgeon, Nebula, and Locus awards. Her stories have appeared in McSweeney's, Boston Review, Clarkesworld, F&SF, and The Best Science Fiction and Fantasy of the Year. She lives near Seattle.