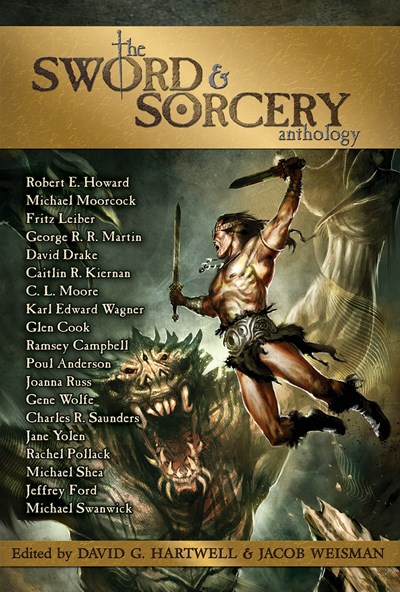 Blood will flow, heads will roll, dragons will soar, and the dead shall rise. Journey to ancient cities ruled by sinister mages, storm-tossed seas where monsters dwell, mysterious towers full of ancient secrets, and dark dungeons with untold treasures. From Robert E. Howard’s Conan the Barbarian to George R. R. Martin’s Song of Ice and Fire, join the legendary heroes and villains in nineteen epic adventures that are sure to bring out the barbarian in you.

Anti-hero Elric infiltrates a band of mercenaries to match wits with a powerful sorcerer. With her trio of dragons, Daenerys Stormbringer makes a fool’s bargain with slave traders. A mage’s apprentice, the young Grey Mouser uses newfound power to battle an evil duke. Conan breaks into the Tower of the Elephant to steal a spectacular jewel with a dark secret. Despite her drunkard’s ways, Malmury slays an old sea troll before facing his powerful daughter.

David G. Hartwell is a senior editor at Tor/Forge Books and the publisher of the New York Review of Science Fiction." He is the author of Age of Wonders, the editor of the anthologies The Dark Descent and The World Treasury of Science Fiction, and the coeditor of two anthologies of the best Canadian science fiction, Northern Stars and Northern Suns. He lives in Pleasantville, New York.

Jacob Weisman is the founder, editor, and publisher at Tachyon Publications. His writing has appeared in the Cooper Point Journal, the Nation, Realms of Fantasy, the Seattle Weekly, and in the college textbook, Sport in Contemporary Society. He is the series editor for anthologies including The Secret History of Fantasy, The Urban Fantasy Anthology, and Crucified Dreams: Tales of Urban Horror. He lives in San Francisco.