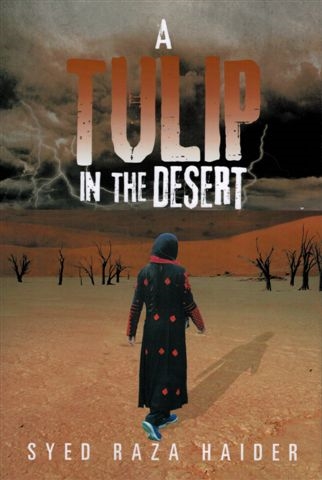 A Tulip In The Desert

A Tulip in the Desert is the story of Amina, a nine year old girl from a small village in the Waziristan region of northern Pakistan. She lives in an extended family system surrounded by the families of her father’s male relatives in an enclosed compound called a kot.Amina narrates the next ten years of her tremulous life. Ups and downs in her tale open a window into the enigmatic society of ultra-conservative Waziristan where modernity has made little inroads. Life is particularly harsh for girls as they are kept extremely constrained and their fates are decided entirely by their male relatives. Amina puts up an enduring fight against the system albeit at a high cost.As if life isn’t hard enough for her, she develops a forbidden passion for an elite sport, a sport that has no place in this “medieval” society, and is utterly forbidden for a Waziri girl. Her passion for this sport starts as another one of her battles but soon becomes an all-consuming war during which she finds totally unexpected allies and even more unexpected adversaries.A new twist comes with the start of the American-Afghan war. Thousands of Afghani Taliban flood her village as refugees but soon start imposing their versions of Islamic laws and morality. On one front, Amina’s family and other villagers become repeated targets of Taliban vengeance while on the other front they become collateral damage of the American bombing.Amina recounts how these events seal the fate of each member of her extended family while decisively impacting her passion for playing her sport at an international level.

Syed Raza Haider was born in Northern Pakistan and did most of his early schooling there. Later he studied medicine and the German language in Switzerland. He got his Ph.D. degree in immunology from England. Afterwards he moved to the US where he held appointments as a lecturer, a research scientist and an assistant professor at universities in Illinois and New York.Currently, he works as a scientist and lives in the San Francisco bay area with his wife and three children. Raza plays squash and badminton and enjoys hiking and biking. He has a keen interest in the current affairs and closely follows the news from the Subcontinent and the Middle East. He is a fervent reader and has been an active member of reading groups and discussion forums for over a decade. He is also a senior member of a writer’s club.