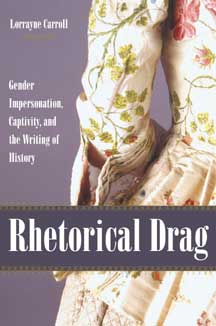 Gender Impersonation, Captivity, and the Writing of History

An innovative discussion of this unique genre of American literature

In this fresh examination of seventeenth-, eighteenth-, and nineteenth-century American captivity narratives, author Lorrayne Carroll argues that male editors and composers impersonated the women presumed to be authors of these documents. This “gender impersonation” significantly shaped the authorial voice and complicated the use of these texts as examples of historical writing and as women’s literature. Carroll contends that gender impersonation was pervasive and that not enough critical attention has been paid to male intervention in female accounts.

Rhetorical Drag examines the familiar territory of captivity narratives, including versions of Hannah Duston’s captivity, and widens it by analyzing numerous examples, placing each in a deeply historicized context. For example, Mary Rowlandson’s The Soveraignty and Goodness of God is viewed as a template against which later authors might differentiate their works rather than as a model. In this vein, Carroll looks at how Cotton Mather shaped the narrative of Hannah Swarton in light of Rowlandson’s text (itself thought to have been edited by his father) and according to the ideals of female behavior outlined in his conduct book for women, Ornaments for the Daughters of Zion. A chapter on Quaker captivities illuminates the practices of censorship among Friends.

Furthermore, Carroll does original archival work on the provenance of Susannah Johnson’s narrative and makes some interesting discoveries about the practices of gender impersonation and collaborative composition that produced Johnson’s text. Using this narrative, which appeared in the late eighteenth century, Carroll discusses the shift and evolution of gender norms in the representation of women’s voices and embodied experience.

Those interested in early American literary studies and historiography as well as women’s and gender studies will find Rhetorical Drag a fascinating and important addition to the literature.

Lorrayne Carroll is associate professor of English at the University of Southern Maine.