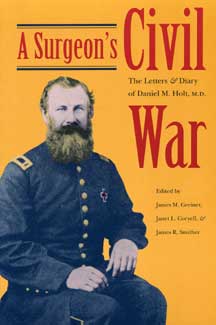 The Letters and Diary of Daniel M. Holt, M.D.

Daniel M. Holt, a successful country doctor in the upstate village of Newport, New York, accepted the position of assistant surgeon in the 121st New York Volunteer Army in August 1862.  At age 42 when he was commissioned, he was the oldest member of the staff.  But his experience served him well, as his regiment participated in nearly all the major campaigns in the eastern theater of the war—Crampton’s Gap before Antietam, Fredericksburg, Salem Church, the Mine Run campaign, the Wilderness, Spotsylvania, Cold Harbor, Petersburg, the 1864 Shenandoah Valley campaign, and Appomattox.

In A Surgeon’s Civil War, the educated and articulate Holt describes camp life, army politics, and the medical difficulties that he and his colleagues experienced.  His reminiscences and letters provide an insider’s look at medicine as practiced on the battlefield and offer occasional glimpses of the efficacy of Surgeon General William A. Hammond’s reforms as they affected Holt’s regiment.  He also comments on other subjects, including slavery and national events.  Holt served until October 17, 1864 when ill health forced him to resign.