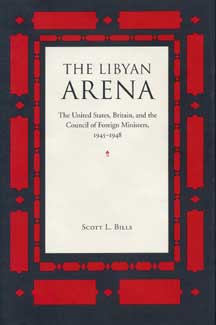 The United States, Britain, and the Council of Foreign Ministers, 1945-1948

Following the Second World War, the disposition of Italy’s former colonies, Libya, Eritrea, and Somalia, become the responsibility of the Council of Foreign Ministers (CFM), a body of representatives from Britain, France, the Soviet Union, and the United States. The controversies that evolved within this coalition over the settlement of these dependencies played a significant role in shaping U.S.-British relations—particularly their partnership in the Middle East—as cold war tensions intensified. The Libyan Arena examines Anglo-American plans for North African decolonization and focuses specifically on the events preceding the UN discussions that led to the creation of the modern Libyan state. Based primarily on sources at the National Archives in Washington, D.C., and newly opened files at the Public Record Office in Kew, England, this study represents the most accurate and comprehensive account to date of the CFM’s work in North Africa. Students of 20th-cebntury U.S.-British diplomatic history, post-World War II African and Middle Eastern history, transnational policymaking, decolonization, and the early cold war era will find much of interest here.