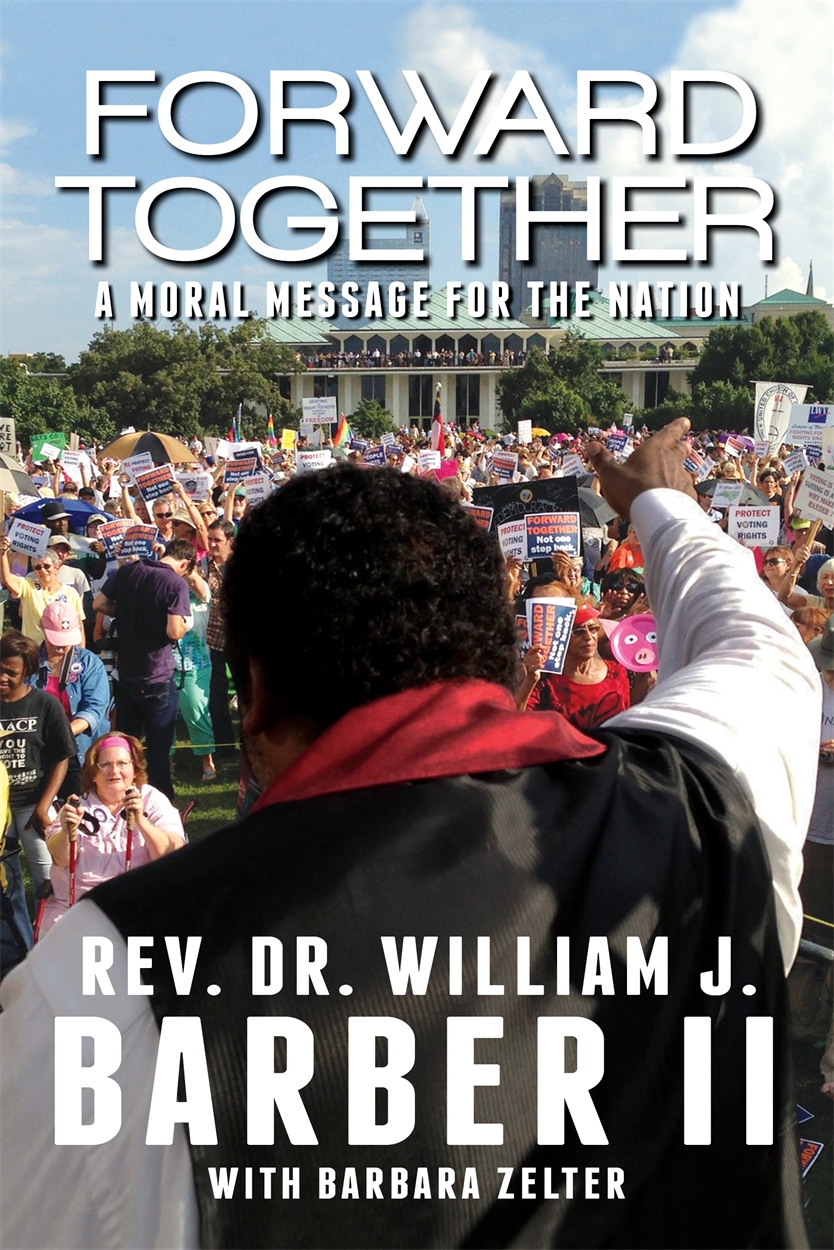 A Moral Message for the Nation

In the spring of 2013, seventeen people gathered at the North Carolina state legislature to protest extreme legislation passed by the General Assembly attacking health insurance, unemployment insurance, labor, and voting rights. The ministers, labor, and human rights activists began praying, singing, and chanting, and were ultimately arrested. That group grew into crowds of thousands at successive "Moral Mondays" rallies, and by summer's end nearly 1,000 people had been arrested, making this sustained moral protest one of the largest acts of civil disobedience in U.S. history. The effort grew out of seven years of organizing with more than 160 groups.

Rallies continued in 2014, with a "Moral March" of 80,000 people in February. Rev. Dr. William Barber II, a pastor and president of the North Carolina Conference of the NAACP, now the largest in the South, became one of the architects of the Forward Together Moral Movement. In a new book, Forward Together, Rev. Barber tells the story of a new fusion civil rights movement, a "big tent," in which black and white, gay and straight, rich and poor, old and young, Republicans and Democrats are all welcome.

Rev. Barber's sermons/speeches at the protests, many of them collected in Forward Together, became the inspiration and rallying cry for a new civil rights movement. North Carolina today is at the epicenter of the political and spiritual crisis affecting 21st-century America. What happens here, says Barber, can shift the center of gravity in the American political discourse. Similar movements are now growing in states around the country.

Forward Together captures the essence of what it means to preach in the public square.

William J. Barber II (Author)
Rev. Dr. William J. Barber II is pastor of Greenleaf Christian Church (Disciples of Christ) in Goldsboro, NC, the President & Sr. Lecturer of Repairers of the Breach, Co-Chair of the Poor People's Campaign: A National Call For Moral Revival, and a member of the National NAACP Board.

Rev. Dr. Barber is also the architect of the Forward Together Moral Movement that gained national acclaim with its Moral Monday protests at the North Carolina General Assembly in 2013. These weekly actions drew tens of thousands of North Carolinians and other moral witnesses to the state legislature.

A highly sought after speaker, Rev. Dr. Barber has given keynote addresses at hundreds of national and state conferences, including the 2016 Democratic National Convention. Previously he served as president of the North Carolina NAACP, and currently sits on the National NAACP Board of Directors. A former Mel King Fellow at MIT, he is a Visiting Professor of Public Theology and Activism at Union Theological Seminary and a Senior Fellow at Auburn Seminary. Rev. Dr. Barber is regularly featured in media outlets such as MSNBC, CNN, New York Times, Washington Post, and The Nation Magazine, among others. He is the 2015 recipient of the Puffin Award and the Franklin D. Roosevelt Four Freedoms Award.

His father, William J. Barber I, published The Disciples Assemblies of Eastern North Carolina in 1966 with the Christian Board of Publication, Chalice Press' parent corporation.