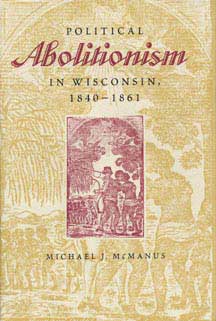 Michael J. McManus’s study of political abolitionism in Wisconsin demonstrates the overriding importance of slavery-related issues in bringing on the political crisis of the 1850s and the American Civil War. In the years prior to the war, the political struggle to free enslaved blacks and block the “peculiar institution’s” spread into the western territories became intertwined with concerns over the future of republican institutions in America and the liberties of northern Whites.

McManus shows that Wisconsin was more radical on slavery and race-related issues than most other northern states, and that slavery, rather than local ethnocultural concerns, was of greatest significance to the state’s voters in the prewar years.

Michael J. McManus received his Ph.D. in history from the University of Wisconsin-Madison in 1991. He is a partner/owner of McManus, Perkins & Associates, Ltd., and investment and insurance planning firm. His essay “‘Freedom and Liberty First, and the Union Afterwards’: State Rights and the Wisconsin Republican Party, 1854-1861” appeared in Union and Emancipation: Essays on Politics and Race in the Civil War Era (Kent State University Press, 1997).