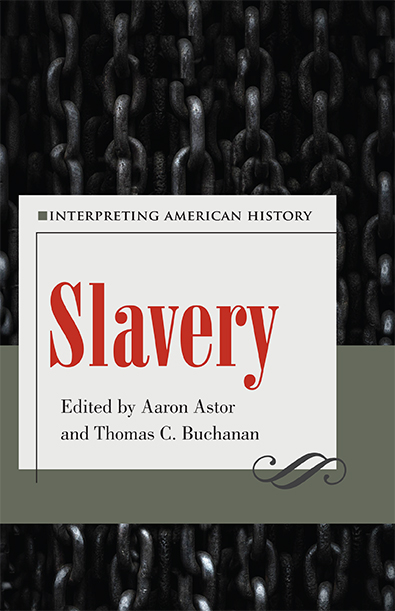 Americans have vigorously debated and interpreted the role of slavery in American life for as long as enslaved people and their descendants have lived in North America. Contemporaries and later writers and scholars up to the present day have explored the meaning of slavery as a system of labor, an ideological paradox in a “free” political and social order, a violent mode of racial exploitation, and a global system of human commodification and trafficking.

To fully understand the various ways in which slavery has been depicted and described is a difficult task. Like any other important historical issue, this requires a thorough grasp of the underlying history, methodological developments over time, and the contemporary politics and culture of historians’ own times. And the case of slavery is further complicated, of course, by changes in the legal and political status of African Americans in the 20th and 21st centuries.

Slavery: Interpreting American History, like other volumes in the Interpreting American History series, surveys interpretations of important historical eras and events, examining both the intellectual shifts that have taken place and various catalysts that drove those shifts. While the depth of Americans’ historiographical engagement with slavery is not surprising given the turbulent history of race in America, the range and sheer volume of writing on the subject, spanning more than two centuries, can be overwhelming. Editors Aaron Astor and Thomas Buchanan, together with a team of expert contributors, highlight here the key debates and conceptual shifts that have defined the field. The volume will be an especially helpful guide for advanced undergraduate and graduate students, professional historians new to the field, and other readers interested in the study of American slavery.

Aaron Astor is associate professor of history at Maryville College. He is the author of Rebels on the Border: Civil War, Emancipation, and the Reconstruction of Kentucky and Missouri, 1860–1872 and has served as a contributor to the Disunion series in the New York Times.

Thomas Buchanan is senior lecturer in history at the University of Adelaide in Australia and the author of Black Life on the Mississippi: Slaves, Free Blacks, and the Western Steamboat World.