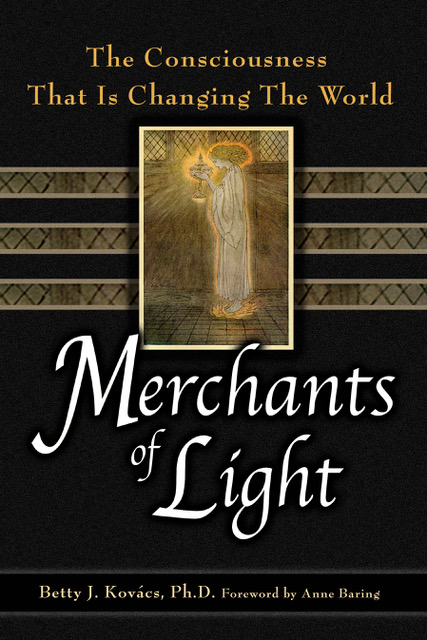 The Consciousness That is Changing the World

Why did the Roman Church wage a centuries-long campaign to destroy Classical culture and all previous spiritual traditions? What was the secret at the heart of these traditions that was so powerful that an organization would feel justified in torturing and murdering men, women, and children; in burning Christian gospels, Gnostic texts, Jewish texts, Arabic manuscripts; and in destroying temples, monasteries, sanctuaries, Mystery Schools and academies of higher learning?

This persistent repression of the shaman-mystic-scientist traditions has left Western culture addicted to a tragically limited and negative worldview that now threatens to destroy the world. Merchants of Light: The Consciousness That is Changing the World returns to us

Our soul stories that carry the blueprint for our evolution

The sacred knowledge that we are immortal, divine, and creative

Betty J. Kovács received her Ph.D. from the University of California, Irvine, in Comparative Literature and Theory of Symbolic/Mythic Language. She has studied and taught in Europe and the United States. She taught Literature, Writing, and Symbolic/Mythic Language for twenty-five years. She served many years as Chair and Program Chair on the Board of Directors of the Jung Society of Claremont in California and sits on the Academic Advisory Board of Forever Family Foundation. She is author of The Miracle of Death: There is Nothing But Life and Merchants of Light: The Consciousness That is Changing the World.