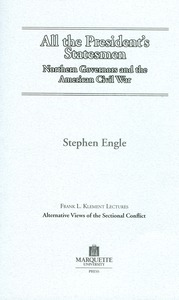 All the President’s Statesmen

"Scholars of the American Civil War have all but ignored the fact that northern governors believed that federalism and consequently states’ rights did not die with secession. The political struggle to maintain some sense of governmental cohesion between nation and state persisted in the North throughout the war as these distinct and independent states were pressured to form a more unified nation. Americans had for decades empowered the states as guardians of liberty against the federal government, and as citizens volunteered through their states they remained committed to protecting these individual rights by fighting to preserve a Union that afforded them those liberties.

Certainly, less visible than battlefield contests, this struggle was no less important because American government, both state and federal, had never before been under such strain to endure.” So begins the story of that struggle as recounted by History Professor Stephen Engle, of Florida Atlantic University.

Steve Engle, professor of history at Florida Atlantic University, studies and teaches political and economic evolution of the 19th Century American Republic. His research has focused on the study of the American Civil War and Reconstruction Era and his books examine the ethnic dimensions of the period, civil-military relations during the war, and the politics of power.

His recent work, Gathering to Save a Nation: Lincoln and the Union’s War Governors received the 55th Annual Barondess-Lincoln Award for 2017, was a finalist for the Emerging Civil War Book Award, and named Honorable Mention for the Sally and Morris Lasky Prize in Political History.

Other books include: Yankee Dutchman: The Life of Franz Sigel; Don Carlos Buell: Most Promising of All; Struggle for the Heartland; The American Civil War in the West; The American Civil War: This Mighty Scourge of War (with Gallagher, Krick, and Glatthaar); A Yankee Horseman in the Shenandoah Valley (with David Coles); Civil War: Fort Sumter to Appomattox (with Gallagher, Krick, and Glatthaar); A War Worth Fighting: Abraham Lincoln's Presidency and Civil War America.