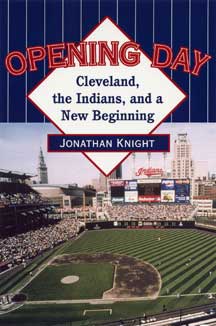 Cleveland, the Indians, and a New Beginning

“Opening Day offers great players, high stakes, and the hinge of history turning as a new era in Cleveland sports begins. Knight exhaustively chronicles the first game at Jacobs Field against the Mariners and it is clear that a whole different brand of Cleveland Indians has come to Cleveland.”—Bill Livingston, Cleveland Plain Dealer

“I thought I knew everything worth knowing about the first game at Jacobs Field. But Jonathan Knight surprised me with his exhaustively researched account. He also manages to weave in all sorts of Tribe history, such as a cool story about the first opening day at League park. Can’t say I remember much about that one!”—Bob Dyer, Akron Beacon Journal

Opening Day is sportswriter Jonathan Knight’s inning-by-inning look at the opening game at Jacobs Field on April 4, 1994. New home to the Cleveland Indians, “The Jake” was for fans symbolic of the team’s turnaround. For the regional community this ballpark marked the beginning of Cleveland’s long-awaited renaissance.

The redemption of the Indians began in 1986, when the Jacobs brothers, Richard and David, purchased the underfinanced and mismanaged franchise. And despite a devastating 1991 season, when the Tribe lost a record 105 games and finished in last place, 34 games behind the division-leading Toronto Blue Jays, the team and its fans persevered. The Jacobs’ legacy culminated in the opening of Jacobs Field, variously described as “a jewel” and Cleveland’s “field of dreams,” in the spring of 1994. The Indians made more postseason appearances in their first five years at Jacobs Field than in the previous ninety-three seasons of franchise history.

Author Jonathan Knight skillfully recaptures memorable moments from opening days of the past, creating this story that shows how the fortunes of the team and the city converged. On that day in early April, the Indians and the City of Cleveland together experienced a true opening day—one in which the past was forgotten and the future was clear and bright.