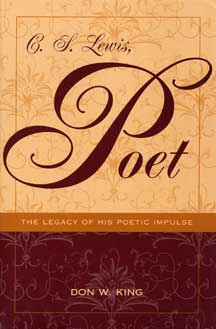 The Legacy of His Poetic Impulse

C. S. Lewis is best known as the creator of the fanciful world of Narnia and as a masterful writer of literary criticism and Christian apologetics.  But he began his literary career as a poet, under the pseudonym of Clive Hamilton, and only later did he turn to prose writing and find fame.

In C. S. Lewis, Poet: The Legacy of His Poetic Impulse Don W. King contends that Lewis’s poetic aspirations enhanced his prose and helped make him the master stylist so revered by the literary world.  With its careful examination of early diaries and letters, and the inclusion of four of Lewis’s previously unpublished narrative poems and eleven of his previously unpublished short poems, this important book explains the man through his writing and considers how Lewis’s lifelong devotion to poetry is best realized in his works of prose.  Readers and admirers of Lewis will certainly find their understanding of his writing greatly enhanced by this perceptive book.