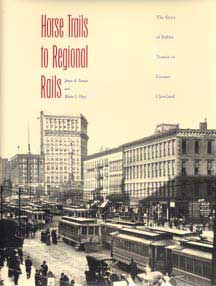 The Story of Public Transit in Greater Cleveland

The history of public transportation in Greater Cleveland spans two centuries. As the city developed from a trading post on Lake Erie to an industrial giant and ever-growing urban center, transportation policies and practices both promoted and reflected the dynamics of change. From the opening of the Ohio and Erie Canal to the opening of the new waterfront rapid transit, Toman and Hays trace the ever-changing contours of a metropolitan area and the modes of transportation available to its public. The scope of the book is comprehensive—canal, river, lake, and air transport—but the focus is on Cleveland’s streetcars, interurbans, trackless trolleys, buses, and rapid transit trains. It also explores the effect of the coming of the automobile and its inevitable impact on the city. Due attention is given to political, social, and technological forces that affected public transportation. The authors are unapologetically nostalgic when discussing the “golden years” of electric operations (1888-1963), a time when people seemed to enjoy the city more. The book contains maps of the changing transportation infrastructure and striking photographs, most not published until now. It will be invaluable to a wide audience—historians, collectors, transportation professionals, and those who love cities.