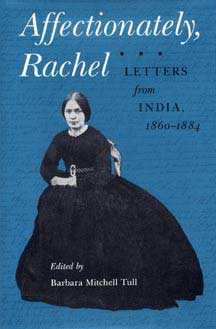 Rachel Kerr Johnson’s lifetime collection of letters offers the unique perspective of a 19th-century woman, wife, mother, and American abroad.  Besides showcasing her talent for lively storytelling, they portray both the ordinary and extraordinary observations of a woman who spent more than 20 years traveling in India with her missionary husband and their children.

In 1856, Rachel attended the Female Seminary in Steubenville, Ohio, where she began her correspondence with family members in Hookstown, Pennsylvania.  She married Will Johnson in 1860, and, after a much-noted 120-day sea voyage, established herself as a homemaker in various Presbyterian missions throughout the Northwestern Provinces of India until 1884.  Her countless personal letters reveal the closeness she felt to her family despite the distance and speak of the hardships of disease and the difficulties of raising children in a foreign culture.  They provide colorful descriptions of the landscape, keen insights about India and the customs of its people, and day-to-day details of mission life.

Her letters are additionally illuminating for their perspective on the Civil War in America and the social relationship between American missionaries and British officials.  News of the war reached India months late, anguishing the distanced Americans, and expressed the anti-Union sentiments of the British press.  This alienated Rachel and other Union sympathizers, demonstrating the reserve between British and American communities in India at the time.

Rachel’s final letters recount her time in Charlotte, North Carolina, where Will served as president of Biddle University.  An epilogue gives a brief description of the activities of Will and their children after Rachel’s accidental death in 1888.

Barbara Mitchell Tull is the great-granddaughter of Rachel Kerr Johnson. She is a coordinator of Delaware (Ohio) Home Share and the author of 150 Years of Excellence, a Pictorial History of Ohio Wesleyan University. Her former positions include superintendent of an Ohio Board of Mental Retardation and Developmental Disabilities, assistant professor at Ohio Wesleyan University, and communicative disorders clinicians.