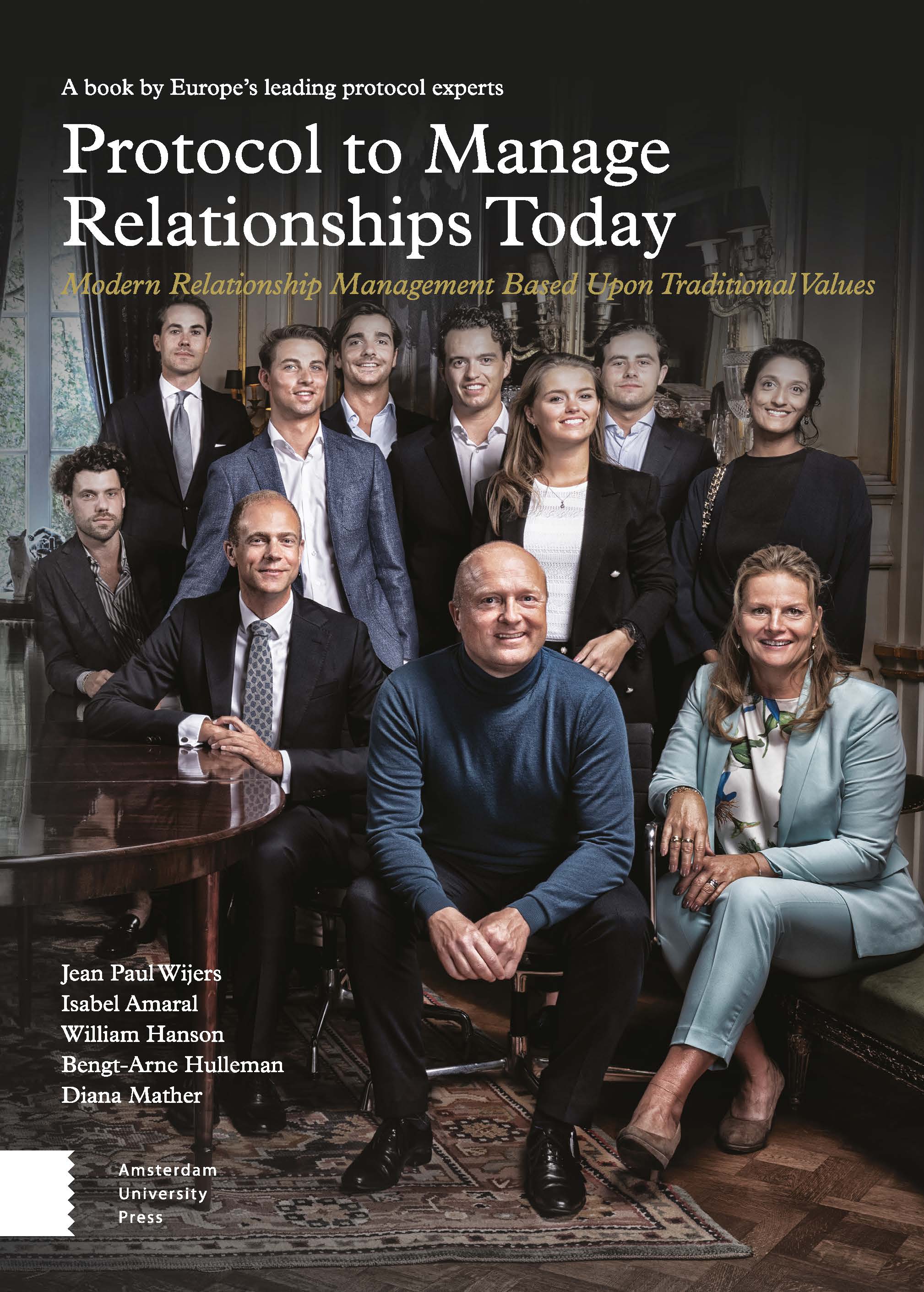 Protocol to Manage Relationships Today explains the contemporary value of protocol, not only for monarchies or diplomatic institutes, but for any non-profit or for-profit organisation. This book presents modern protocol as a tool to build strong, authentic networks of reciprocal relationships.

When used effectively protocol can:
- Increase the effect of the networking activities of an organisation. Protocol gives a professional structure to relationship management, to achieve access to the 'right' networks and a reciprocal relationship with the most valued stakeholders.
- Deepen relationships. In our world there is so much focus on pragmatism in building relationships - protocol focuses on the common ground to gain value.
- Be used as a valuable tool in a post COVID-19 era, where the need for space and time to build real and authentic relationships is well understood.

This book is focused on developing an increasingly vital expertise for professionals who deal with complex relationship management issues on a strategic and tactical operational level. They come from different fields, such as government institutions, non-profit organisations and commercial environments.

This book also gives protocol officers a contemporary approach towards the application of protocol. It is not designed as a complete guide to all the rules of protocol, but it describes how to translate the context into a tailor-made protocol for each meeting or event. The book explains protocol as a flexible method to handle unique situations.

Protocol is presented on four levels: the 'why' of protocol; the strategic and tactical level; the practical implementation; and the execution of protocol.

Protocol to Manage Relationships Today is written by Europe's foremost protocol experts with collective years of experience with the management of networking meetings and events at the highest level.

Jean Paul Wijers is the Executive Director of Protocolbureau and the Institute of Strategic Relationship Management. In 1996 he graduated from Hotelschool The Hague, one year after founding Protocolbureau. Between 2001 and 2009 Jean Paul worked for the Dutch Royal Household as Head Usher at Royal Weddings and State Funerals. He is one of the authors of Managing Authentic Relationships: Facing New Challenges in a Changing Context (Amsterdam University Press, 2019), a book about strategic relationship management. Jean Paul Wijers is a soughtafter relationship management expert, regularly called upon to support the development of a new relationship management. He teaches at the Hotelschool The Hague university and at Georgetown University in Qatar. Isabel is a renowned Portuguese expert on corporate image and protocol and has developed executive trainings and coaching programmes in Portugal, Austria, Brazil, Cape Verde, France, Spain, Angola, Namibia, the People's Republic of China and The Netherlands. Holding a Master's degree in International Relations from Lisbon University, she is a teacher at the Diplomatic Institute and at several universities in Portugal, Spain and Brazil. She's the author of two books: Imagem e Sucesso, a book on image and corporate protocol (nine editions), and Imagem e internacionalização, a book about crosscultural communication for a global market (two editions). She has been a keynote speaker on cross-cultural communication at conferences in France, the United Kingdom and Belgium. Isabel Amaral is Founder and President of the Portuguese Protocol Studies Association (APOREP) since 2005. William is Executive Director and owner of The English Manner and is widely regarded as the UK's leading expert in etiquette. He has taught British manners and civility all around the world, from China to Saudi Arabia, New York to Russia. He has worked for many leading VIPs, including international businesses and brands, as well as training regularly in some of Britain's leading schools. William is the BBC's go-to voice for matters of etiquette and courtesy and holds two Guinness World Records for etiquette. He is author of the best-selling The Bluffer's Guide to Etiquette and The Bluffer's Guide to Entertaining. He writes a column for the world's most-read news website, MailOnline/DailyMail.com, about matters of good taste and social behaviour. In 2017 he became a Fellow of the Royal Society of Arts. Graduated from Hotelschool The Hague and holding a Master's degree from Erasmus University, Bengt-Arne started his career in protocol at the Dutch Royal Household as Policy Assistant to the Grand Master and to the Master of Ceremonies of Her Majesty Queen Beatrix of The Netherlands. During the years 2002-2008 he was closely involved in numerous royal and state ceremonies, such as Royal Weddings, State Funerals, Baptisms and many state visits. Bengt-Arne is also the former Head of the Protocol, Visits and Events Unit of the International Criminal Court in The Hague (2010-2019), an international organisation with currently 123 Member States. During his tenure he was responsible for the protocol of the opening ceremony of the Permanent Premises (2016) in attendance of His Majesty King Willem-Alexander of The Netherlands, United Nations Secretarygeneral Ban Ki-moon and many other dignitaries, and the organisation of the events commemorating the twentieth anniversary of the Rome Statute (2018), attended by the President of the Federal Republic of Nigeria, multiple Presidents of National Senates and Parliaments and ministerial delegations. He is author of The Hague, International City of Peace and Justice: A Relational Network Brand. Bengt-Arne is now the Executive Director of Protocolbureau. As a protocol expert, he provides assistance in the organisation of high-level events and teaches protocol and international protocol around the world. Formerly a BBC newsreader, Diana brings years of first-rate communication and presentation skills to her trainings. In the mid-1980s, Diana left her successful career in broadcasting to start training in etiquette, public speaking and media coaching. Diana works all over the world with a wide range of clients that include MPs, senators, lawyers, TV presenters and business people. She regularly contributes to a variety of TV and radio programmes worldwide and is the author of fourteen books. Her latest, Speak and Confidence, will be published in 2021.