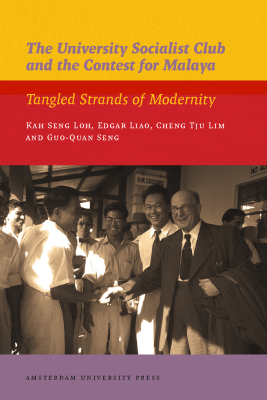 The University Socialist Club and the Contest for Malaya

The book, using a small group of left-wing student activists as a prism, explores the complex politics that underpinned the making of nation-states in Singapore and Malaysia after World War Two. While most works have viewed the period in terms of political contestation groups, the book demonstrates how it is better understood as involving a shared modernist project framed by British-planned decolonization. This pursuit of nationalist modernity was characterized by an optimism to replace the colonial system with a new state and mobilize the people into a new relationship with the state, according them new responsibilities as well as new rights.
This book, based on student writings, official documents and oral history interviews, brings to life various modernist strands – liberal-democratic, ethnic-communal, and Fabian and Marxist socialist – seeking to determine the form of postcolonial Malaya. It uncovers a hitherto little-seen world where the meanings of loud slogans were fluid, vague and deeply contested. This world also comprised as much convergence between the groups as conflict, including collaboration between the Socialist Club and other political and student groups which were once its rivals, while its main ally eventually became its nemesis.

Kah Seng Loh is a postdoctoral fellow at Kyoto University.0Guo Quan Seng is a history PhD candidate at the University of Chicago.