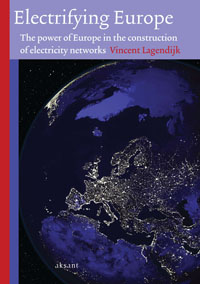 The power of Europe in the construction of electricity networks

Nowadays most consumers are aware of the European dimensions of their electricity supply. But what ideas lie behind this European network? In constructing electricity networks, “Europe” performed a Janus-faced function. On the one hand, a European network would bolster economic growth and peace. On the other, economic growth through electrification would increase military potential.
By combining a wide array of rarely used sources, this book unravels how engineers, industrialists, and policymakers used ideas of Europe to gain support for building a European system. By focusing on transnational and European actors, this book is a valuable addition to existing national histories of electrification. It is an original contribution to the history of technology, while also making the role of technology visible in more mainstream European history.
The empirical chapters show how ideas of European cooperation in general became intertwined with network planning during the Interwar period, although the Depression and WWII prevented a European electricity network from being constructed. The subsequent chapters describe the influence of the Marshall Plan on European network-building, focusing on both its economic and military aspects. The last chapter portrays how the Iron Curtain was contested. The troubled expansion of networks and capacity in Western Europe provided an underpinning for political rapprochement with the East in the 1970s and 1980s. Political and economic turmoil after 1989 accelerated this process, leading to an interconnected European system by 1995.