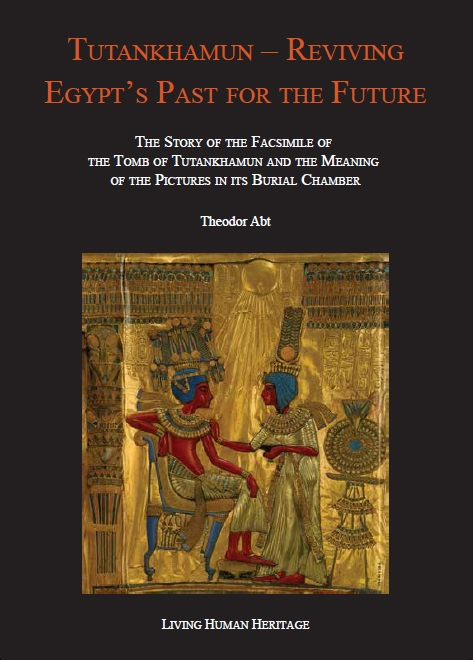 Tutankhamun – Reviving Egypt’s Past for the Future

This book is intended as a guide for visitors to the facsimile of the tomb of Tutankhamun. Part I begins with an overview of what we owe to the Pharaonic culture in general. Part II goes on to the story of the rebuilding of the tomb of Tutankhamun. Then in Part III there follows an overview of the iconographic programme in the burial chamber. This section concludes with an introduction to the religious representations and texts, given on the four gilded shrines placed around the sarcophagus. These images and texts combine to provide unique guidelines to Pharaoh Tutankhamun in his tomb prior to his resurrection as Re-Osiris. The more we learn about the deeper meaning of these guidelines in the Pharaonic tombs, the more we can also see what all this may mean for us today. And the more these images and texts acquaint us with the wisdom of the ancient Egyptians about this world of the Beyond, the more we will be motivated to protect these treasures of the past in a sustainable way for future generations.

p.p1 {margin: 0.0px 0.0px 0.0px 0.0px; font: 10.0px Verdana; -webkit-text-stroke: #000000}span.s1 {font-kerning: none} Theodor Abt (1947), born in Zurich, Switzerland; Ph.D. from the Federal Institute of Technology (ETH) in Zurich 1977, 1973-79 project leader of overall regional development concepts for two Swiss mountain regions. Since 1975 Jungian Analyst in private practice. 1983-88 member of the board of the C.G. Jung Institute, Zurich. Since 1990 Professor for Rural Sociology at the ETH. Since 1995, member of the board of the Research and Training Centre for Depthpsychology according to C.G. Jung and M.-L. von Franz, Zurich. Since 1988, President of the Society of the Friends of the Royal Tombs of Egypt. His research focuses on the relationship of the outer world with the needs of the inner unconscious world. Of his publications in German is available in English: Progress without Loss of Soul, 1990. Erik Hornung (1933), born in Riga, Latvia, Ph.D. Univ. of Tubingen 1956, Professor of Egyptology Univ. of Basle, Switzerland, 1967-1998. His research has focused on the Valley of the Kings and the edition of the Books of the Netherworid; he published the first edition of the Amduat in 1963. Since 1988 Vice-President of the Society of the Friends of the Royal Tombs of Egypt. Of his many books in German, several have been translated into English: Conceptions of God in Ancient Egypt. The One and the Many, 1982 (Paperback 1996); The Valley of the Kings: Horizon of Eternity, 1990; The Tomb of Pharaoh Seti I., 1991; History of Ancient Egypt. An Introduction, 1999; Akhenaten and the Religion of Light, 1999; The Ancient Egyptian Books of the Afterlife, 1999; The Secret Lore of Egypt, 2001.