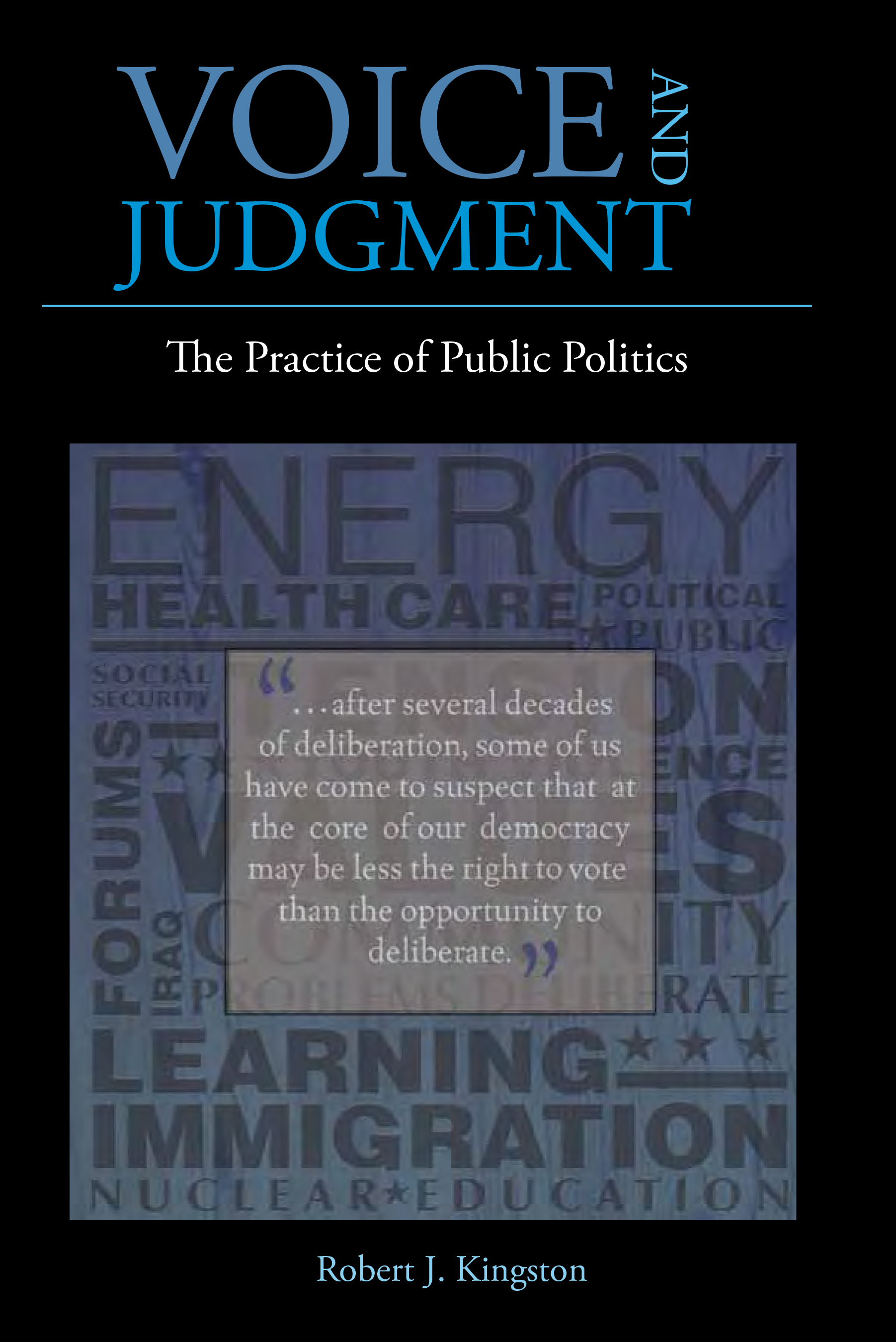 The Practice of Public Politics

In Voice and Judgment: The Practice of Public Politics, Robert Kingston, senior associate of the Kettering Foundation, provides a comprehensive analysis of the continuing public deliberations carried out, nationwide, over the past 30-some years, under the auspices of the National Issues Forums and other organizations.

The task of publicly “talking through” a national or community problem is not always easy. Nor has an answer (or an agreement) always been found—or universally shared! But what regularly does emerge, when people deliberate, is a kind of shared understanding. At best, it is the sense of a shared public will. More important yet, such public deliberations suggest something of what it may take to make democracy work as it should. And, after several decades of deliberation, some of us have come to suspect that at the core of our democracy may be less the right to vote than the opportunity to deliberate.

This study responds to critical and controversial domestic and multinational issues that have challenged—and sometimes still do challenge—citizens’ relations to each other and their degrees of trust in their elective government. Many such issues remain continuing problems for the American public and its leadership; but the public discussion of each reveals, in compelling ways, not merely the need for, but also the extraordinary promise of public deliberation as a means of moving tensely conflicting issues toward the kind of shared understanding from which viable public policies may grow—or to an increasingly shared understanding even of issues that, at points, have seemed to bear irreconcilable expectations.

The public voice is seldom the voice that the establishment—the political, corporate, and press establishments—is anxious to hear. And unless we are prepared to present and explain the dilemmas that the public acknowledges and is preparing to cope with—rather than primarily the opinions that people in their uncertainty express—we might as well leave the public voice at home.

The continuing practice of public deliberation itself reveals, in this book, the slow-paced movement that translates the idea of change into the conceptualizing of public action.

Bob Kingston has been a Senior Associate of the Kettering Foundation—which is a research organization—since 1981, when he was invited to join in shaping what were to become known as the National Issues Forums. Since that time, he has had a hand in virtually all of the Foundation’s programs, both nationally and internationally. He has been editor of the Kettering Review since its inception, in 1982, and he served as executive producer of the television program, A Public Voice, annually distributed by PBS, nationwide, from the National Press Club in Washington D.C., from 1991 through 2006.

Kingston was born and educated in England; he served in the British Army of Occupation in Germany (BAOR) in the nineteen forties; and he took a “first” at Oxford. He then served as an assistant tutor at the Oxford University International Graduate Summer School in the 1950s, and contributed programs to the BBC’s radio and foreign services. He came to the U.S. in 1954 to teach Shakespeare (at the University of Michigan) on a one-year, international faculty exchange, but stayed to serve in teaching and administrative positions at several U.S. colleges over the next fifteen years. And he became a U.S. citizen!

In 1969 he was invited to join the newly established U.S. Federal agency, the National Endowment for the Humanities and, as Deputy Chairman and Acting Chairman of the agency in the Nixon, Ford, and Carter Administrations, he guided the development of its fledgling programs—like the state-based committees on the humanities, the American Issues Forums for the Bicentennial, the nation’s annual Jefferson Lecture, international museum exchanges, and early public broadcasting efforts in the humanities (like the Adams Family Chronicles and Sesame Street). After leaving government service, in the late 1970s, he served as President of the College Board (CEEB), then as Executive Director of The Public Agenda (then called “The Public Agenda Foundation”) in New York City.