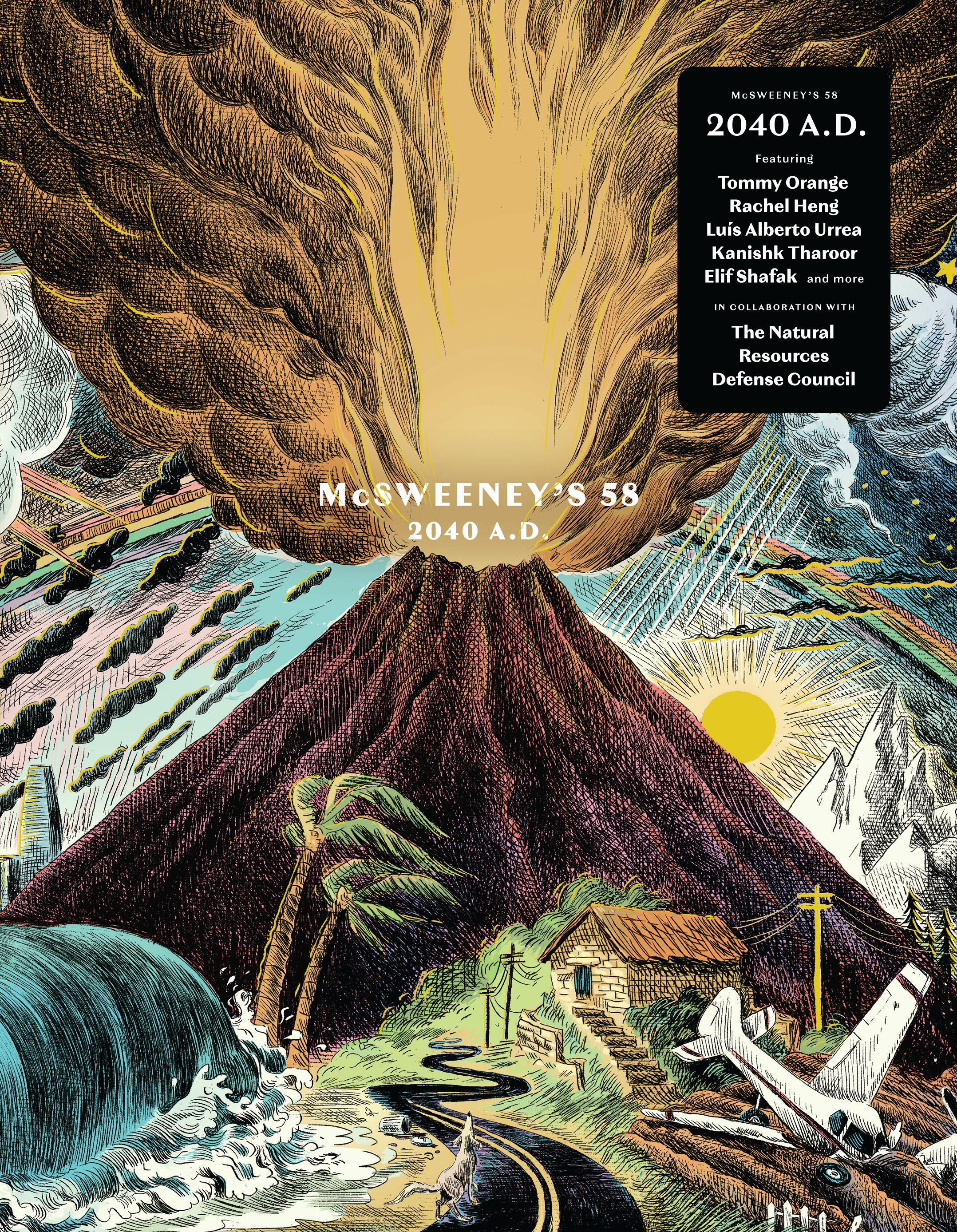 Spanning six continents and nine countries—from metropolitan Mexico City to the crumbling ancient aqueducts of Turkey, the receding coastline of Singapore to the coral shores of northern Australia—McSweeney’s 58 is wholly focused on climate change, with speculative fiction from ten contributors, made in collaboration with the Natural Resources Defense Council (NRDC). Global in scope, each story is set in the year 2040 and imagines what the world might look like if the dire warnings issued by the Special Report on Global Warming of 1.5 °C were to come true. Using fiction—informed here and there by realism and climate science—this issue explores the tangible, day-to-day implications of these cataclysmic scientific projections. Featuring Tommy Orange, Elif Shafak, Luis Alberto Urrea, Asja Bakic, Rachel Heng, and others, with gorgeous full-color illustrations by Wesley Allsbrook.

From the issue's introduction by Susan Casey-Lefkowitz, Chief Program Officer of the NRDC: "Each story in this special issue is the product of a unique collaboration between its author and an NRDC policy expert with specialized knowledge of how climate change is already affecting the world, and how it could continue to affect the world in the decades to come. The result, we hope, is a collection where fiction’s already considerable power is fortified by science."

Mikael Awake is a writer based in Brooklyn, NY, and the child of formerly undocumented immigrants from Ethiopia. His essays have appeared in GQ, the Common, Bookforum, the Awl, and elsewhere.

Asja Bakic (1982) is a Bosnian/Croatian author. Her debut short story collection, Mars, was published by Feminist Press earlier this year. She’s currently finishing her next book of short stories, Sladostrašce.

Birna Anna Bjornsdottir is an Icelandic writer who lives in New York City and Reykjavik. She is the author of three novels. Her most recent one is Perlan, published in Iceland in 2017.

Claire G. Coleman is a Wirlomin Noongar poet, essayist, novelist, and speaker, whose ancestral country is in the south coast of Western Australia. Her debut novel, Terra Nullius, won a black&write! Writing Fellowship and a Norma K Hemming award and was shortlisted for the Stella Prize and Aurealis Awards, among many others. The Old Lie (September 2019) is her second novel.

Rachel Heng is the author of the novel Suicide Club (Henry Holt, 2018), which was featured as a best summer read by outlets such as the Irish Times, ELLE, Gizmodo, NYLON, the Rumpus, and Bustle. Suicide Club will be translated into ten languages worldwide and was shortlisted for the Gladstone’s Library Writer in Residence award in 2019. Rachel’s short fiction has received a Pushcart Prize Special Mention and Prairie Schooner’s Jane Geske Award, and has appeared or is forthcoming in Glimmer Train, Guernica, Kenyon Review, Best Singaporean Short Stories Volume Four, and elsewhere. She has received grants and fellowships from the Vermont Studio Center, Sewanee Writers’ Conference, Fine Arts Work Center, and the National Arts Council of Singapore. Rachel is currently a fellow at the Michener Center for Writers.

Tommy Orange’s debut novel, There There, won the 2018 PEN/America Hemingway Award and was a finalist for the Pulitzer Prize in fiction. Orange is an enrolled member of the Cheyenne and Arapaho Tribes of Oklahoma. He was born and raised in Oakland, California.

Abbey Mei Otis is a writer, a teaching artist, a storyteller, and a firestarter, raised in the woods of North Carolina. She loves people and art forms on the margins. Her debut story collection, Alien Virus Love Disaster (Small Beer Press), was a finalist for the 2019 Philip K. Dick Award and the Neukom Institute Literary Arts Award For Speculative Fiction.

Elif Shafak is an award-winning novelist and the most widely read female author in Turkey. She has written seventeen books, eleven of which are novels, including the Booker Prize–nominated 10 Minutes 38 Seconds in this Strange World. Translated into fifty languages, Shafak is a political scientist, a women’s rights and LGBT rights activist, and a two-time TED Global speaker. An honorary fellow at St Anne’s College, Oxford, she has been awarded the title of Chevalier des Arts et des Lettres, and she is a member of the Royal Society of Literature.

Kanishk Tharoor is the author of Swimmer Among the Stars (FSG, 2017), a collection of short stories that was a Guardian Book of the Year and an NPR Book of the Year, and which won the Tata Lit Live! First Book Award for fiction in India. His writing has appeared in the New York Times, the Atlantic, the Guardian, the Paris Review, the New Yorker, Virginia Quarterly Review, and elsewhere, and has been nominated for a National Magazine Award. He is the presenter of the BBC radio series Museum of Lost Objects and a senior editor at Foreign Affairs.

Luis Alberto Urrea is the author of eighteen books, including The House of Broken Angels, a 2018 finalist for the NBCC Award in fiction. A Guggenheim Fellow and Pulitzer Prize finalist, he has also won an Edgar Award, an American Academy of Arts and Letters Award, a Lannan Literary Award, and an American Book Award, among others. Born in Tijuana to an American mother and Mexican father, Urrea is most known as a border writer, though he is much more interested in bridges. He is a distinguished professor of creative writing at the University of Illinois at Chicago.