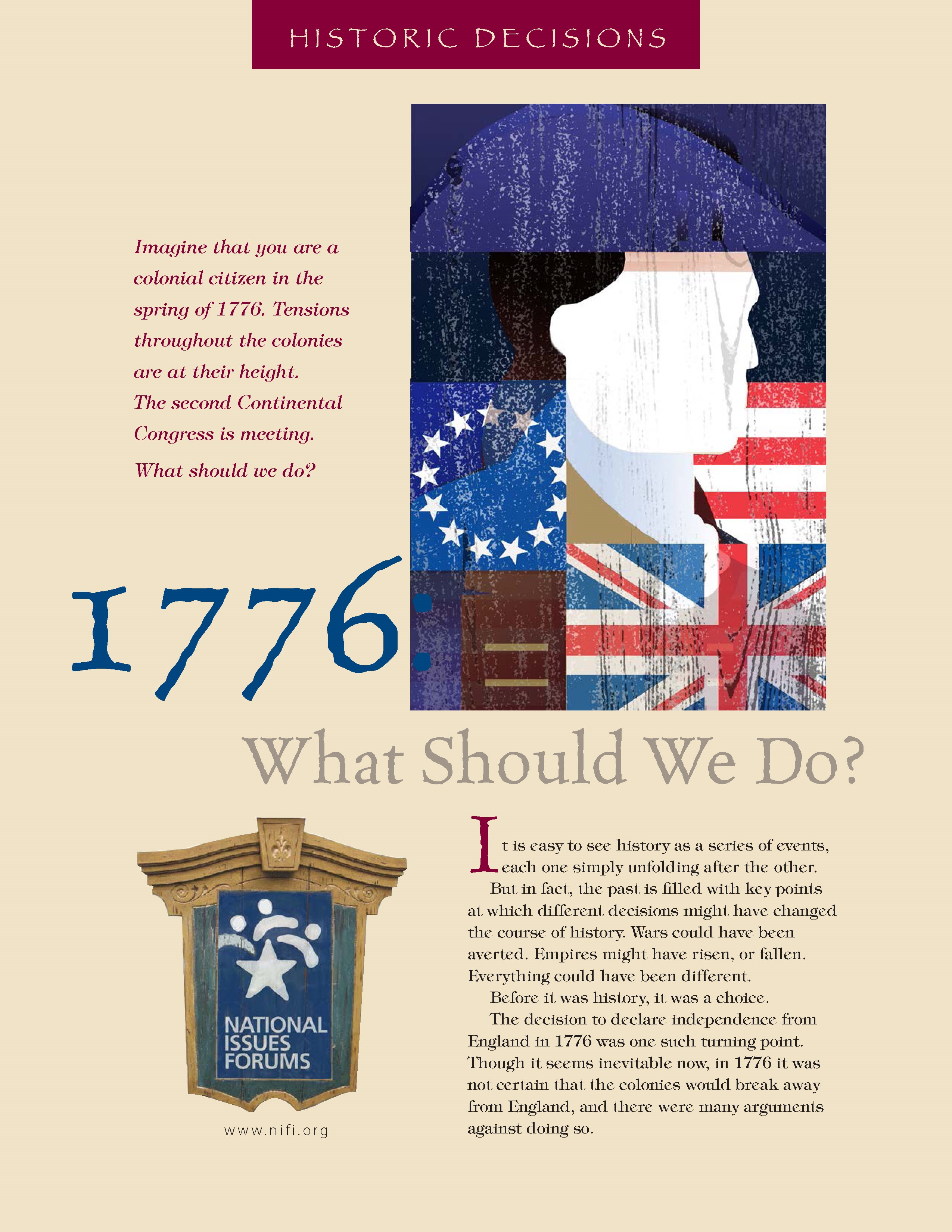 What Should We Do?

Historic Decisions: 1776 What Should We Do?It is easy to see history as a series of events, each one simply unfolding after the other.But in fact, the past is filled with key points at which different decisions might have changed the course of history. Before it was history, it was a choice.Imagine that you are a citizen in one of the 13 colonies in the spring of 1776. Tensions across America, especially in New England are at their height. What should we do about our relationship with England?This 16-page issue guide presents three options to consider:Remain Unwavering in Our Support of the KingBe true to our heritage and remember that people in the 13 colonies are subjects of the Crown.Declare Independence in Clear TermsBe bold and declare that the 13 colonies are independent.Use Diplomacy to Pursue Our AimsNegotiate a peaceful solution.

Brad Rourke is a program officer at the Kettering Foundation. His workincludes studies of naming and framing issues in public terms and howpeople make decisions and work together on shared challenges incommunities. Rourke is executive editor of the National Issues Forumsissue books as well as other issue books produced for public deliberation.Rourke has written and cowritten a number of articles and op-ed pieces,appearing in print publications such as the Washington Post, the ChristianScience Monitor, Foundation News and Commentary, Campaigns &Elections, and the Cleveland Plain Dealer. He contributed a chapter on theethics of citizenship to Shades of Gray (Brookings Institution, 2002). He has spoken at the National Press Club, the Brookings Institution, and the Chautauqua Institution. He is listed in Who’s Who in America.Rourke has been a Kettering associate since 2005. Prior to joining the foundation, Rourke was president of the Mannakee Circle Group, a public issues firm with clients from a cross-section of the philanthropic and nonprofit sectors. He was founder and publisher of Rockville Central, a hyperlocal news source hebegan in June 2007 that became the second most-read local blog in Maryland. He helped design and regularly participated as a lecturer in the bipartisan candidate-training program of the University of Virginia’s Sorensen Institute for Political Leadership. Rourke was senior project manager and then director of external initiatives at The Harwood Institute for Public Innovation and vice president for public policy at the Institute for Global Ethics. He has served on the staffs of then-controller of California Gray Davis and Congresswoman Jane Harman and as deputy California campaign manager for the National Health Care Campaign.Rourke received his BA in comparative literature from UC Berkeley.