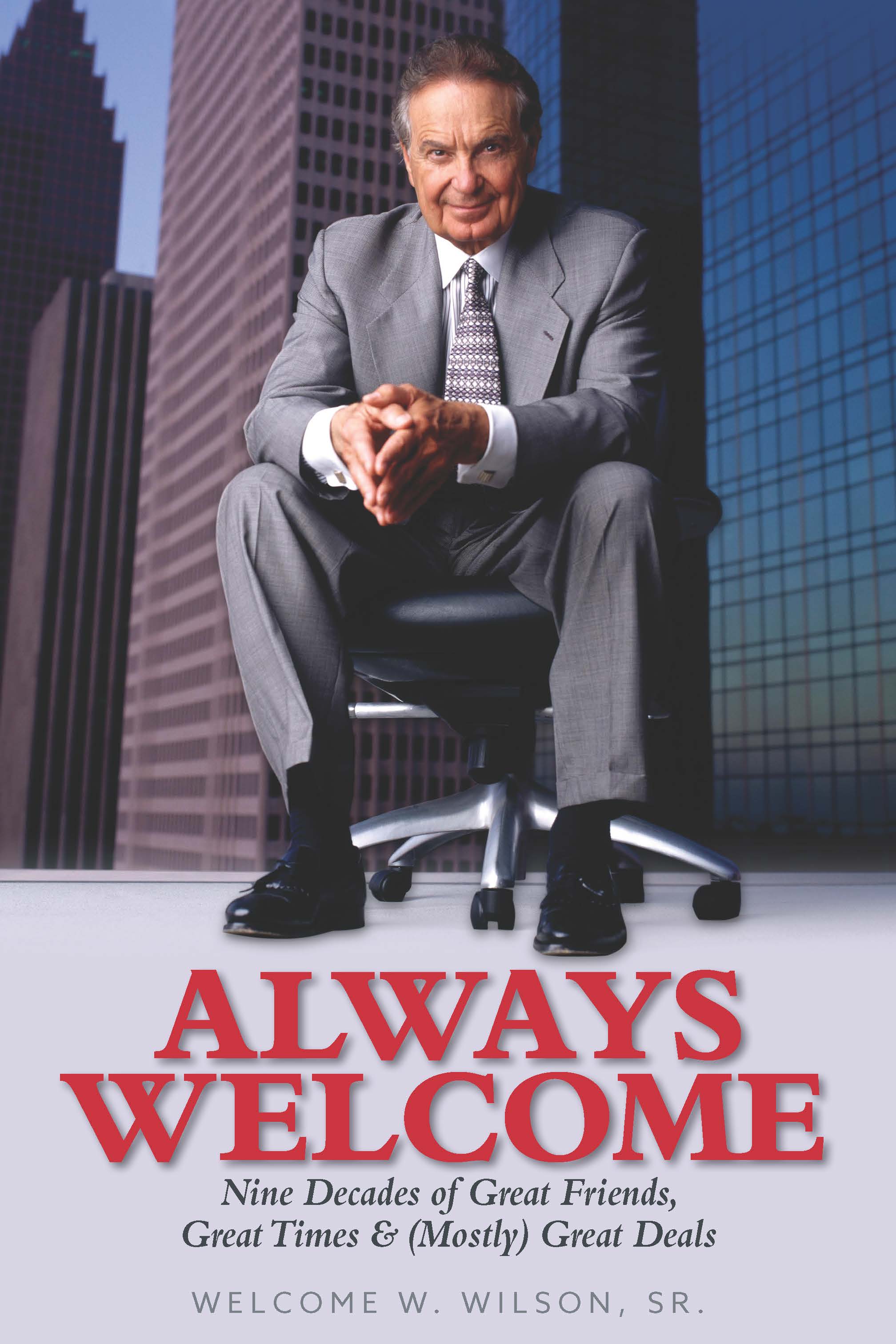 By any measure, Welcome Wilson, Sr., chairman of the GSL Welcome Group—a privately held real estate development firm headquartered in Houston--has led a big life. He’s made friends in the highest places, developed communities that continue to prosper, survived some major set backs, and made hundreds of successful real-estate deals. He married his college sweetheart, and they have five happy and productive children. Growing up in South Texas during the Depression, Wilson learned the art of the Wilson deal, an uncanny ability to pitch deals that favor the Wilsons, from his father and his many uncles. He honed this skill in partnership with his brother, Jack. Combining the Wilson touch with hard work and determination, he found continuing success: at the University of Houston, in the Navy, in civic and Federal service, and again and again in real estate. It often took some fast-talking, some scrambling, and lots of hard work, but Wilson has always had great confidence that he could figure out a way to get a job done. Named a legend by the Texas Business Hall of Fame, Wilson has received numerous other awards for his many accomplishments. His memoir provides insight on his relationships with Eisenhower, Kennedy, LBJ and other notable leaders, shows the many ways he supports the university and the city that have provided him so much opportunity, and explains the inner workings of his most notable deals, including the founding of The Jamaica Corporation and the development of the Astrodome. Colorful, lively and opinionated, Welcome Wilson finds real delight in bringing people together and making big things happen. His candid and entertaining anecdotes will engage readers and inspire anyone who wants to find more success in life to aim high and have confidence.

Welcome W. Wilson, Sr. of Houston is Chairman of the Board of GSL Welcome Group, LLC, which, as landlord, owns eighty manufacturing and other industrial facilities in Texas comprising just less than 3.5 million square feet of space. He is also a principal in Kingham Dalton Wilson, Ltd, a regional industrial construction company. Mr. Wilson has been a real estate developer in Texas for fifty-seven years beginning with his first project in Galveston County, which is now the incorporated City of Jamaica Beach (1,600 home sites). He was also the developer of Tiki Island in Galveston County, now an incorporated City of 1,200 home sites. In total, Mr. Wilson developed 8,000 home sites in four counties in Texas. In addition to planned communities and industrial property, Mr. Wilson was a developer of apartments; retail centers; office buildings, including two-22 story buildings in downtown Houston; and a hotel, the fifth Marriott Hotel ever built (1965). Mr. Wilson was recently inducted into the Texas Business Hall of Fame. In the last few years, he also received the Trailblazer’s Award from the American Advertising Federation of Houston, the Crusader’s Award from Houston Neighborhood Centers, the Entrepreneur of the Year Award from the Houston Technology Center, the Distinguished Service Award from CoreNet Global and the Lifetime Achievement Award from the Houston Business Journal. Mr. Wilson serves on the Board of Directors of the Greater Houston Partnership and serves as the Chairman of its Higher Education Committee. In the 1960s and 1970s, Mr. Wilson owned 10% of the Houston Astros baseball team and served as the Chairman of the Board of two Texas banks. He was also the Chairman of the Board of an American Stock Exchange Company. Mr. Wilson recently completed three years as Chairman of the Board of Regents of the University of Houston System (70,000 students) from which he graduated in 1949. He now serves as Chairman of the UH Drive to Tier One Campaign. In 2013 he received an Honorary Doctor’s Degree for his service to UH. In the 1950’s/1960’s, Mr. Wilson served in the Executive Office of the President under both Presidents Dwight D. Eisenhower and John F. Kennedy. At age 30, he received the Arthur Fleming Award as one of Ten Outstanding Young Men in the Federal Service (Neil Armstrong and Robert Gates were later recipients) He was a witness to the Atom Bomb test in Nevada in 1954 and the Hydrogen Bomb test at Bikini Atoll in the Pacific in 1956. Mr. Wilson served under President Lyndon Johnson as Special Ambassador to Nicaragua in 1966 when Anastasio Somoza was the President of that country. During the Korean War, Mr. Wilson was a Naval Officer in Japan. Upon his return, he served as an assistant to the mayor of Houston, and Houston Director of Civil Defense during the Cold War. Mr. Wilson received Distinguished Alumnus awards from the University of Houston and Texas Southmost College, as well as the UH Bauer College of Business. He and his wife, Joanne, recently celebrated their 65th wedding anniversary with their five children, sixteen grandchildren and eleven great-grandchildren.