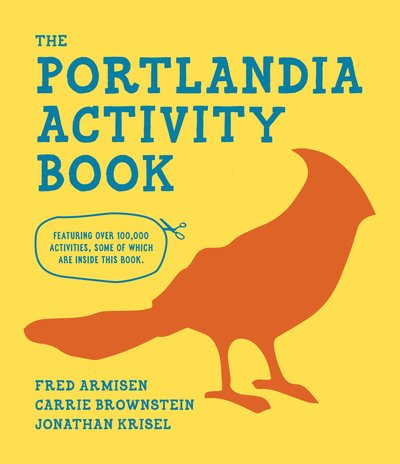 This is The Portlandia Activity Book?a compendium of guaranteed enrichment for the Pacific Northwestern part of your psyche. Like a cool high school that prefers a sweat lodge to the traditional classroom, this book will expand your mind through participation, dehydrate you to a state of emotional rawness, then linger in the corners your bare soul.

Here you will find enough activities to get you through a year’s worth of rainy days, including: "How to Crowdfund Your Baby," "Punk Paint By Numbers," "Terrarium Foraging," and so much more. With pages unlike any you’ve seen before, this is the kind of book that you can be yourself around. Shed the trappings of normalcy, let down your glorious mane, and take the deepest breath of your life. Portlandia is beckoning your arrival.

PORTLANDIA is an absurd and dreamy rendering of Portland, Oregon starring SNL alum Fred Armisen and Carrie Brownstein (vocalist/guitarist, Sleater-Kinney). The show both celebrates and satirizes the city of Portland?but always with affection. Fred and Carrie appear as a variety of Portland citizens including a militant biker, members of an adult hide-and-seek league, self-righteous feminist bookstore owners, and extreme outdoor enthusiasts.

PORTLANDIA was awarded a 2012 Peabody Award and has been nominated for multiple Emmys­­, including Outstanding Directing and Writing for a Variety Series. It was the 2013 winner of the Writers Guild Award for Outstanding Achievement in Writing Comedy/Variety Series. Fred and Carrie co-created PORTLANDIA with fellow writer Jonathan Krisel, who also directs the show. The series is Executive Produced by Lorne Michaels and Andrew Singer of Broadway Video Television. It is filmed entirely on location in Portland, Oregon.