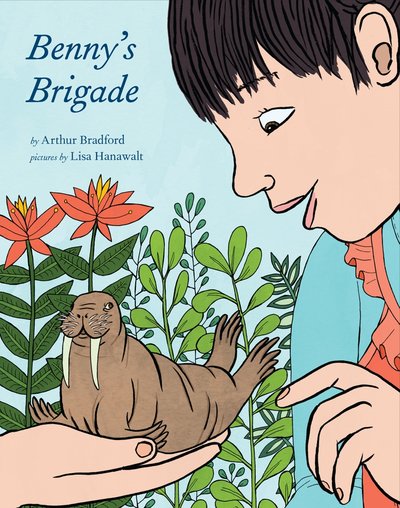 At recess one day, sisters Elsie and Theo spy a nut wiggling on the ground. Out pops Benny?the world’s smallest and most gentlemanly walrus. After the girls learn that Benny misses his home in the sea, they send him sailing in a milk-carton boat, along with a trusty band of adventure-seeking slugs. Together, Benny’s Brigade (as they call themselves) begin their voyage to a truck-sized island paradise, avoiding the salt water as much as they can. Slugs don’t like salt.

Arthur Bradford is an O. Henry Award winning writer and filmmaker. His writing has appeared in Esquire, McSweeney's, Vice, Zoetrope, Men's Journal, and many other publications. His first book, Dogwalker, was published by Knopf in 2001 and Vintage paperback in 2002. It has been translated into nine languages.

Bradford is also the creator and director of the acclaimed "How's Your News?" documentary series, versions of which have been broadcast on HBO/Cinemax, PBS, and Channel Four England. Most recently Bradford developed the concept into a series for MTV which ran throughout 2009. He has also directed several shorts and music videos.

Bradford lives in Portland, Oregon and serves as co-director of Camp Jabberwocky, the nation's longest running residential summer camp for people with disabilities.