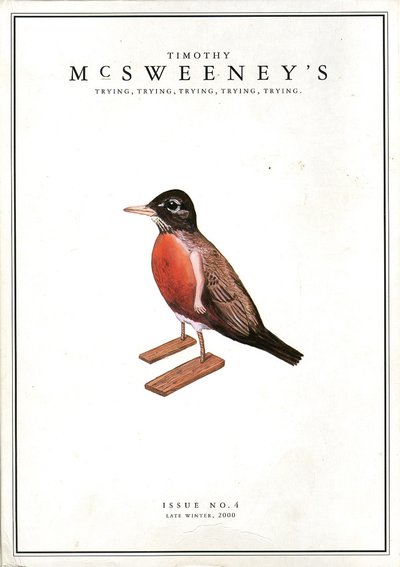 McSweeney’s Issue 4 is a box containing 14 booklets. The booklets feature fiction and nonfiction, from Denis Johnson, Haruki Murakami, Sheila Heti, George Saunders, Jonathan Lethem, Rachel Cohen, Lawrence Weschler, Rick Moody, Lydia Davis, and many others. The first of many experiments in book and magazine packaging, McSweeney’s Issue 4 marks a departure from the simpler paperback mold of the first three issues. For this issue, authors chose the art and design of their booklet. So, for example, Denis Johnson chose to use his son Matt's doodle for the cover of his three-act play "Hellhound On My Trail." George Saunders gave us a photo he took years ago, in Russia, for the cover of his "Four Institutional Monologues." And we took all of these booklets, and fit them in a box with a wood-footed bird adorned on the top. (For those asking Why?, there is also a booklet devoted to answering that question, written by editor Dave Eggers.) This rare issue, virtually out of print since it was first published, is now lovingly remade with a sturdier, more archive-worthy box and the same wondrous collection of prose.